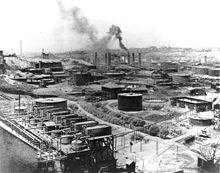 The American Standard Oil Company was the largest oil refining company in the world until it was broken up. It was founded by John D. Rockefeller together with some business partners (including Henry M. Flagler ) and was the source of the legendary wealth of the Rockefeller dynasty. The way the company did business led to the first anti- monopoly legislation in the United States and ultimately to the unbundling of the company into what are still important oil companies today.

In 1863, Rockefeller and a partner started a small oil refinery in Cleveland . The company was successful and grew steadily. In 1870, Rockefeller reorganized the company and renamed it the Standard Oil Company .

In 1871, some refinery owners around Rockefeller planned to found an alliance in order to receive transport discounts from the railways for their oil. At the same time, the railways should be convinced to charge higher prices to competitors who were not part of the alliance. The alliance was formed through the takeover of an existing, unknown company with the meaningless name South Improvement Company . Rockefeller became the main shareholder of the South Improvement Company through his Standard Oil Company and thus its managing director.

The South Improvement Company presented itself to the railroad companies as the legitimate representative of the majority of American oil companies. In fact, it only represented about 10% of the industry. However, it was possible to convince the railways and thus to enforce transport discounts for the alliance and price increases for the competitors.

At the beginning of 1872 the company's conspiratorial approach became known. When the new transport prices were inadvertently published early and these were twice as high as the old prices for non-members of the alliance, the other oil companies resisted. Among other things, the oil producers boycotted the Standard Oil Company, which then closed its refineries. A court prohibited the railroad companies from offering discounts. The US Congress condemned the conspiracy.

Rockefeller, however, was not deterred and now demanded discounts for his part, which, as an influential customer, were also granted to him under strict secrecy. The oil producers also had to give up their delivery boycott quickly because they were dependent on sales. This is how Rockefeller received its discounts and its oil deliveries and emerged victorious from the crisis.

Rockefeller founded the end of 1872, the National Refiners Association (association of national oil refineries ), which he became Chairman. About 80% of all American refineries were represented in the association. As a countermeasure, the oil producers founded the Petroleum Producer's Agency , which tried to keep crude oil prices high by restricting production - a procedure that is still used today in OPEC .

Rockefeller appeared to play along, and his National Refiners Association approved the production limit, only to threaten the Petroleum Producer's Agency with a total boycott a few months later for allegedly violating its own production limit. Many smaller oil producers feared the boycott because they were heavily in debt. Just ten months after it was founded, the Petroleum Producer's Agency broke up.

The expansion of Standard Oil

Rockefeller continued to expand his power. He traveled through America from 1875 to 1878 and convinced the owners of the 15 largest refineries to join Standard Oil. Small refineries were not handled very gently. Rockefeller pressured them and bought them for 40% or less of their market value . In addition, the factory of the recalcitrant Vacuum Oil Company was destroyed by a deliberate explosion. The perpetrator later confessed to having been bribed for the sabotage.

Rockefeller's actions did not go unnoticed. He and some of his directors were found guilty of conspiracy by a court jury after a legal battle in 1879. However, through a deal negotiated by Rockefeller, all escaped actual conviction. As part of the deal, Rockefeller had to forego the special prices for rail transport, but was able to continue its expansion and monopolization unhindered. Using the tried and tested methods that were already being used to get to the refineries, Standard Oil adopted practically all pipelines in the USA from 1879 onwards . Then Standard Oil turned to the dealer network. It built up its own dealer network and wholesaler and pushed the existing dealer networks out of the market. It thus had practically the entire oil recovery chain under its control.

In 1891, 90 percent of US kerosene exports came from Standard Oil Company and the company controlled 70 percent of the world market.

By 1881 Standard Oil had developed into a network of around 40 companies. These were combined in the Standard Oil Trust in 1882 . In 1888 a New York senator began investigating the trust. In addition, there were investigations by other bodies, so that the pressure became too great and there was a real danger of the trust being forced to dissolve by a court. Rockefeller anticipated this by converting the trust shares into individual shares in the companies of the trust and thus dissolving the trust itself. Since the owners of the shares remained the same, the power of the monopoly was also retained.

The Sherman Antitrust Act of 1890

In the 1880s and 1890s, Standard Oil began expanding internationally, usually by establishing joint ventures with existing national oil trading companies. For example, in 1890 Standard Oil founded the German-American Petroleum Society (DAPG) together with the merchants Franz Ernst Schütte and Wilhelm Anton Riedemann . The DAPG was renamed Esso in Germany in 1950 (after the initials of S (tandard) O (il)). In 1891 the Società Italo-Americana pel Petrolio (SIAP), which was later renamed Esso Italiana , was founded together with the company Walter & Co. zu Venice and Carlo Wedekind & Co. founded by Karl Wedekind .

From the 1880s, petroleum for lamps began to be sold in China. For there, the brand name Mei Foo was chosen, which roughly translated means beautiful and reliable or beautiful trust . That was also the name for the lamps produced by Standard Oil and sold very cheaply. According to marketing statements, it was best to run with petroleum from Standard Oil, which was available in the same shop as the lamp. Until then, the farmers had used lamps with vegetable oil.

The government under President Theodore Roosevelt was the first to take action against the influential monopoly of Standard Oil. In his election campaign he had promised under public pressure to take action against monopolies. In 1906, his government opened a case against Standard Oil for violating the Sherman Antitrust Act . This process is considered a milestone in American legal history. On May 15, 1911, the United States Supreme Court found that Standard Oil had violated the Sherman Antitrust Act and ordered the company to be unbundled, causing its share price to plummet. Rockefeller assumed that the price would recover and bought the shares of his company. According to conservative estimates, he earned 200 million US dollars (which in 1901 corresponded to a current value of 5.7 billion US dollars) from the boom that was now beginning , because the invention of the automobile and the First World War left the demand for oil in previously unimaginable levels Dimensions increase.

Standard Oil was divided into the following 34 individual companies:

Note: The arrows indicate which companies are made up of parts of the SO. They do not mean that today's company only consists of the corresponding SO part.

Through acquisitions, renaming, but also “reunions”, some of today's well-known oil companies, such as ExxonMobil (Esso) and Chevron, have emerged from these companies . Other parts were liquidated over time or were absorbed by other companies such as BP .