When developing Sumatra PDF, simplicity was a top priority. The result was a very small program with few functions that was reduced to the essentials - viewing PDF files. Since the program only consists of a single file and has no other external dependencies, it is ideal for portable use. Thanks to the slim interface , the program loads and works very quickly.

One or more pages can be displayed at the same time and zoomed in or out of the text file. You can also jump back and forth between pages, rotate views and search for text in the document. All documents can be sent directly from Sumatra as e-mails, saved as plain text files or printed. Text can either be marked directly with the mouse or by drawing a rectangle around the text with the mouse while holding down the Ctrl key. The text in the selection can then be copied to the clipboard using a menu item or a key combination .

Sumatra PDF has now been translated into more than 60 languages, including German , and can also run on Linux with Wine .

By calling up certain options, quick exit with the Escape key or a restricted mode (deactivating the file menu) can be switched on, making the program ideal as a viewer e.g. B. suitable for help files and print previews from applications. The user can change the appearance and behavior of Sumatra PDF by editing a configuration file . 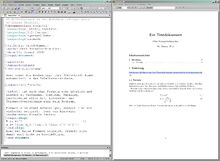 From version 0.8.1 (May 2008) Sumatra PDF contains LaTeX support from William Blum. In connection with a LaTeX editor it can be configured so that LaTeX and PDF files are synchronized using the LaTeX functions pdfsync or SyncTeX . The communication between LaTeX-Editor and Sumatra takes place via the DDE protocol, which is supported by many editors, such as TeXnicCenter and WinEdt . A double click on a text passage in Sumatra takes you to the corresponding source text line in the LaTeX file; conversely, you can also get from the LaTeX source file to the corresponding point in the PDF file, whereby the corresponding point in Sumatra is highlighted.

To generate PDF documents with pdfTeX or XeTeX , Sumatra PDF can be combined with the editors TeXnicCenter, WinEdt, Emacs , Vim and Texmaker , among others .

For the first time, especially in published C ++ written program on June 1, 2006. This version 0.1 used yet Xpdf as PDF Render - program library .

With version 0.2 (August 2006) the switch to Poppler as the renderer took place . Due to the better support of the Windows platforms, the renderer of the document viewer MuPDF was also installed. Poppler was finally removed with version 0.9 (August 2008), so Sumatra PDF is based exclusively on MuPDF.

The first unofficial translation into German was made in June 2007 by Lars Wohlfahrt; this laid the foundation for the multilingualism introduced in version 0.7 (July 2007).

Sumatra PDF's license was changed from GPLv2 to GPLv3 in July 2009 , as MuPDF had also changed its license.

A translation of the PDF files into raster graphics before printing will no longer take place from version 1.2 onwards, which is intended to speed up the printing process and save resources. In version 1.3, marking text with the mouse has been adapted to the behavior of Adobe Reader.

From version 1.4 onwards, a plug-in for the web browsers Mozilla Firefox , Opera and Google Chrome can be installed. AES-256 -encrypted PDF documents can now also be displayed . Support for XPS and Comic Book has been integrated in version 1.5. In the browser plug-in, a document can be printed or saved using the context menu .

With version 1.6 released in 2011, the display of DjVu and (provided Ghostscript is installed) also of PostScript documents was added and an experimental preview function for PDF documents was built into the Explorer for Windows Vista and 7 , which was previously only available in the 32- Bit versions worked fine. In addition, image formats can now also be displayed and the program can thus be used as an alternative image viewer .

From version 2.0 (April 2012) the Sumatra PDF reader is able to read e-book formats. For this purpose, the layout was carefully approximated to the appearance of a classic e-book reader .

With version 2.3 (May 2013) the support for processors without SSE2 instruction set was temporarily discontinued. As a result, the program could no longer run on processors older than Intel Pentium 4 or AMD Athlon 64 . After massive user protests, this change was reversed only one day later with version 2.3.1. Due to time constraints, the underlying version of MuPDF has not been updated since 2013, which is why Sumatra PDF does not support filling out PDF forms, which has been possible in MuPDF for several years.

In February 2014 the Free Software Foundation Europe withdrew the previously existing recommendation of Sumatra PDF as free software . The reason was the use of the UnRAR library, the license of which is classified as not free by the FSF. In version 3.0 (October 2014) the problematic code was replaced, so that Sumatra PDF is again regarded as completely free software by the FSF. If there are processing problems with compressed comic books, it is still possible to use UnRAR by manually adding the library in question. Furthermore, in version 3.0, comic book support was extended to include LZMA and PPMd compression; the PalmDOC format is also supported. Comic books can now be saved as PDF documents.

According to the author, the name Sumatra should not be a homage to the island of Sumatra or to coffee ; rather, there are no particular reasons for choosing this name.