The four-headed Svantovit as an artistic replica at Cape Arkona 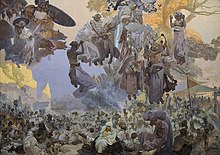 Svantovit (also Svantevit , Sveti Vid , Swantewit , Sventevit, Svetovit , Svatovit , Świętowit or Святовит ) is a Slavic deity . He was the god of war and the supreme deity of the Ranen on Rügen and other Elbe and Baltic Sea Slavs , comparable to the supreme god Perun of other Slavic tribes. Slavic deities often have multiple heads. Svantovit is four-headed, each head looks in one direction. Each direction was assigned its own color: north white, west red, south black and east green.

He was worshiped on Rügen by the Slavic residents in particular as an oracle donor.

Svantowitstein in the parish church Altenkirchen

On Cape Arkona on the island of Rügen there was a wooden statue that represented him with four faces and a horn filled with wine. The statue was in a square, column-supported temple inside the Jaromarsburg . The sanctuary was considered the spiritual center of the Slavs and particularly the residents of Pomerania Ranen . It was destroyed in 1168 by the Danish King Waldemar . A stone relief, which is in the church of Altenkirchen on Rügen and which one could assume that it depicts Svantovit, also shows a male figure with a large drinking horn. It is more likely, however, that this is a priest of the deity.

In 1921, the German archaeologist Carl Schuchhardt believed that he had found the Svantovite cult site with the help of the precise description of the place by the Danish historian Saxo Grammaticus . Research after 1945 showed, however, that what he found was probably a Danish mission church.

Because of the progressive demolition of the high bank, archaeological emergency excavations have been taking place on Rügen again for several years, which surprisingly found the location of the Svantovit temple. It is a rectangular area that was completely free of finds, but around which all the more finds were to be found, which point to offerings and (victoriously destroyed?) Weapon parts. This also coincides with the detailed description by Saxo Grammaticus, which states that the priest was not even allowed to breathe inside the temple so as not to contaminate it.

Evidence of the Svantovite cult

There are numerous written and archaeological evidence for the Svantovite cult on the island of Rügen. The Chronica Slavorum by the chronicler Helmold von Bosau (12th century) describes the Svantovite oracle , to which numerous gifts and offerings from the entire Slavic and neighboring non-Slavic world were made. An example is a valuable trophy received from the Danish King Sven . The Slavic population on Rügen withstood Christian proselytizing longer than other Slavic tribes . Only the attack by the Danes in 1168 and the destruction of the sacrificial site ended the time of Slav rule on the Baltic Sea .

Saxo Grammaticus also reports on the Svantovite cult at the end of the 12th century. It precisely describes the cult site on Cape Arkona: A wooden temple with a single entrance and a red roof housed the larger-than-life wooden statue of Svantovit. Of the four heads, two looked forward and two backward. The drinking horn in the right hand was made of metal and was filled with wine once a year by a single priest, the condition of which served to prophesy about the coming harvest.

The legal claim that the Corvey Monastery made on the island of Rügen from the 12th to the 17th century is referred to in research on the Svantovite cult or on a misinterpretation of this cult as the veneration of St. Vitus (Latin sanctus Vitus ), of the second patron of Corvey Monastery. The most important legal basis for Corvey's claim was the story, which has been documented since the 12th century, that in the 1120s a Slav move by the Duke of Saxony and later Emperor Lothar III. defeated Slavs as former tributaries of the "civitas" Corvey and their master, a certain "sanctus Vitus", revealed, from which it was then deduced that monks from Corvey had evangelized Rügen in an older time and thereby established legal claims of the monastery.

It is assumed that the many- headedness, which is particularly common among Slavic deities (in contrast to Celtic and Roman gods), is a symbol of the multiple power of the respective god.

Other cult objects, which were arranged around the image of the gods, as well as a white horse, which could only be ridden by the priest, were used for other prophecies. B. for oracles to war success or failure. Three hundred horsemen were always on duty to protect the god and increase his treasure.

After the sacrificial ceremonies, in which the priest offered wine and honey cake with bated breath , there were regular extensive sacrificial feasts, which were accompanied by copious alcohol consumption.