The Tanzania Railways Limited (TRL) is a state-owned railway company . In addition to the Tanzania-Zambia Railway Authority , founded in 1976, it also offers rail transport in Tanzania .

A railway company for German East Africa was founded as early as 1891 with the aim of connecting the port of Tanga to Lake Victoria at the foot of the Usambara Mountains . Since 1893 the line has been promoted from Tanga. Due to under-capitalization , the company had to be taken over by the state in 1899. But it was not until after the First World War , already under British mandate , that the route reached its current end point, Arusha, at 437 km in 1929 . Today it is also known as the Usambara Railway .

The Zentralbahn (now Central Line ) from Dar es Salaam followed as the second major rail project of the German colony. For this purpose, the East African Railway Company (OAEG) was founded, the railway construction was financed by the German Reich from 1904 and started in 1905. Kigoma on Lake Tanganyika was reached in 1914, on the eve of the First World War, at kilometer 1252. The scheduled travel time over the entire route was just under 58 hours. Both railways initially remained (apart from a short-term small railroad ) without any connection with each other.

The British Mandate Administration (from 1919) supplemented the Zentralbahn with the branch lines Tabora - Mwanza (379 km) to the south bank of Lake Victoria, Kilossa - Mikumi and Manjoni - Kinjangiri (built in 1931, operations ceased after 1948). In addition, a connection between Moshi on the Usambara Railway and Voi on the Uganda Railway of the Kenya and Uganda Railways in Kenya and in 1954 the Southern Province Railway was created as the third island operation with the connection of the port of Mtwara with Nachingwea and Massassi in the gauge of 610 mm. The latter was abandoned after less than fifteen years of operation.

After Tanzania gained independence, the Central and Usambara Railway was connected parallel to the coast with a line from Mruazi to Ruvu .

During the time of the East African Union , which included the territory of Kenya, Uganda and Tanzania, the Tanzanian network belonged to the East African Railways (EAR). The community was dissolved in 1977. 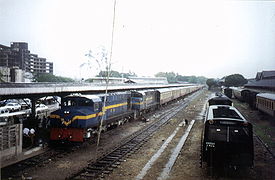 The track width of the TRC is 1,000 mm, the total length of the lines about 2,600 km. All routes are single-lane. They are in very bad shape. There are very few alternatives in the larger train stations. The traction takes place exclusively with diesel locomotives from Canadian and German production. These are several decades old and very prone to failure. Therefore, delays of half a day or a full day are completely normal.

The most important connection today is the Central Line , which runs from Dar es Salaam via the capital Dodoma to the port of Kigoma on Lake Tanganyika. This main east-west connection has several branches:

The railway company has (theoretically) the possibility of cross-border traffic to the northwest (Uganda) and northeast (Kenya). Due to political differences between and political unrest in individual of the participating states, this does not exist in practice. There is also no change of gauge to the 1067 mm track of the TAZARA in the cities where the two systems meet.

For many years the TRC's traffic has decreased. Passenger trains are currently running regularly, i. H. about twice a week with a delay of up to one day, only on the Central Line and two lines branching off from it. The railway was inferior to the competition from buses in terms of transport frequency, price and speed. The rotting fleet of cars couldn't compensate for this in comfort. There are three classes of cars , with the top two also being in the form of a sleeping car . Second class sleeping cars are more in line with the standard of a couchette car .

The company was founded in 1977 after the collapse of the East African Railways with the stock located in Tanzania. The company has been based in Dar es Salaam since it was founded. The board of directors currently consists of:

The state of Tanzania was the sole owner of the TRC. Since 1998 a privatization of the railway has been sought, the beginning of which has been postponed several times. In 2007, Rail India Technical and Economic Services (RITES) Ltd. from India , a global transport company, 51% of the shares in TRC and the concession to transport people and freight for a period of 25 years. This agreement was signed on September 3, 2007 and entered into force on October 1, 2007. The railway company is called Tanzania Railway Ltd. operated. The Tanzanian state holds 49% of the shares.

The World Bank approved a loan of US $ 33 million to modernize infrastructure and rolling stock. 90 locomotives, 1,280 freight cars and 110 passenger cars are to be replaced.

However, this did not happen because the Tanzanian government canceled the contract in 2010.