Guido Theodor Apel (born May 11, 1811 in Leipzig ; † November 20, 1867 there ) was a German writer and founder of the Apelsteine to commemorate the Battle of Leipzig .

Theodor Apel was born as the son of the Leipzig councilor and poet August Apel . As a pupil at the Nikolaischule and after school he was friends with Richard Wagner . From 1830 to 1834 Apel studied law at the universities of Leipzig and Heidelberg . In 1832 he became a member of the Corps Saxo-Borussia Heidelberg . So he was in Heidelberg in the same connection as Robert Schumann . He completed his studies with a doctorate. jur. from.

In Leipzig, Apel was previously Renonce with Corps Saxonia Leipzig . In 1835, Apel signed a petition for the re-admission of student associations at the University of Leipzig, albeit in vain. This was also done by other members of the Corps Saxonia who, like him, were in the circle of Richard Wagner, such as Bernhard Nake, Karl Louis Graf von Beust and Karl Allwill Graf von Tecklenburg.

Apel wrote dramas as well as lyrical and narrative poems. His piece of sewing tape from 1858 was a stage success.

Theodor Apel owned the Ermlitz manor near Schkeuditz , which he had acquired from his grandfather Heinrich Friedrich Innocentius Apel , where he also lived. He was married to Marie, née Ploß. After falling from his horse, he was almost completely blind from 1836 onwards.

Theodor Apel at the inauguration of Apelstein No. 5 in 1861 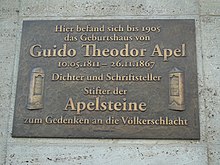 Plaque at the place where Theodor Apel was born in Leipzig

In Leipzig, Apel also sat at the so-called crime table , where the democratic and progressive-minded part of the city's intellectual elite met. Apel is also on the tabletop with “Dr. Th Apel “recorded by name.

Since 1898 a street in the former Petzscher Mark in Leipzig has borne the name of the Apel family, who have been important in Leipzig for over 150 years, the Apelstraße .