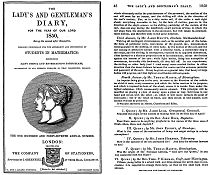 Kirkland's publication on the schoolgirl problem

Thomas Penyngton Kirkman (born March 31, 1806 in Bolton , † February 4, 1895 in Bowdon near Manchester ) was an English mathematician and pastor . He was best known for his work on combinatorics .

Kirkman went to school in Bolton, and although he caught the attention of his teachers in the classical languages, his father forced him to drop out of school at 14 and work for him in his cotton business. It was not until nine years later that he went against his father's will (and financed by himself) to study at Trinity College Dublin , where he studied philosophy and languages ​​as well as mathematics and the exact sciences. He graduated in 1833 and went back to England the following year.

In 1835 he entered the service of the Anglican Church. He was initially vicar ( curate ) in Bury and Lymm. In 1839 he was vicar at Croft near Warrington in what is now Cheshire (then Lancashire ), then rector in 1845 . He held this position until 1891.

He published his first mathematical work in the Lady's and Gentleman's Diary in 1845. In it, seven years before Jakob Steiner , he proved the existence of the configurations later known as Steiner-Triple systems .

In the memory of posterity, Kirkman lives on mainly because of the problem of the 15 schoolgirls : 15 schoolgirls go out in threes for seven days in a row. Group them so that any two of them are only together for one day. Both Arthur Cayley and Kirkman published the first solutions.

In 1853 he began a long series of work on the classification of polyhedra, which finally led to his admission to the Royal Society in 1857 . For a competition of the Paris Academy in 1860 he delved into group theory, but despite its high quality (he lists all transitive groups of grade ≤ 10), neither his submitted work nor that of his competitors Camille Jordan and Émile Mathieu received the prize. Towards the end of his life he was still occupied with knot theory and listed with Peter Guthrie Tait non-equivalent knots with 8, 9 and 10 intersections. In total, he published around 70 mathematical works on very different topics in mathematics.