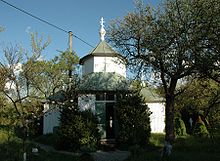 Born in the Russian Empire , he earned his living in the city of Shakhty during World War II by exporting coal for the occupied city. The German Wehrmacht forced him to use his wagon to help the German soldiers flee from the Red Army . Timofei was only released again in Rostov Oblast . Father Timofei later reported that it was here that he had his first vision of Mary .

After years of odyssey he reached Vienna and met his future wife Natascha there. The construction of a church in Vienna failed because of the local authorities, so the two moved on to Munich, where they arrived in 1952.

There they settled on Oberwiesenfeld , on the edge of what was then the airfield that was later to become the Olympic Park . From the abundant war rubble, they built a small house, a chapel and later a small church. When setting up, the two used mostly found materials. For example, they silvered the ceiling of the church with chocolate paper.

For decades, the two lived in their house, which was built without a permit, with the consent of the city authorities. At the end of the sixties it was decided that the sports facilities for the 1972 Summer Olympics would be built on the Oberwiesenfeld. Father Timofei and his partner should have been evicted. After protests by Munich citizens and some daily newspapers, the Olympic site was planned further north.

The small church was then called East-West Peace Church and is one of the sights in Munich. The former Lord Mayor Christian Ude called it the “most charming black building in Munich”.

In 1972 Timofei married his long-time partner Natascha, who died five years later. Their desire to be buried next to the church failed because of the bureaucracy. Where she wanted to lie, Timofei erected a symbolic grave . Every now and then he could be seen laying flowers on the grave or praying. Even then, due to its age (which was never fully checked), it had long since become the “landmark of Munich”, “Olympic hermit” or “ Methuselah vom Oberwiesenfeld”.

Since 2002 he lived mainly in hospitals and old people's homes because of his poor health, where he also died. At 110 years of age, Timofei was the oldest in Munich. Timofei's grave is in the Westfriedhof of Munich (Section 196, No. 45). Eight years before his death, Prokhorov named the Russian Alexander Penkovsky as his successor.

Among other things, an illustrated book and a children's book have been published about the life of Father Timofei.