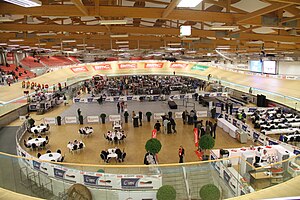 The Tissot Velodrome , until December 2016 Velodrome Suisse , is a multi-purpose hall with a cycling track in the Swiss municipality of Grenchen in the canton of Solothurn .

The hall covers an area of ​​8,000 square meters. The cycling track itself is 250 meters long, made of Siberian spruce and was laid out in accordance with the UCI standard. The curves have a maximum elevation of 46 degrees, the track is seven meters wide. The building is primarily used as a training facility for young track cycling enthusiasts and as a training center for Swiss cycling, and is also available to amateur cyclists . In addition to training, competitions are also held. The interior corresponds to a triple sports play area, which can also be used for other sports, trade fairs, concerts and other events from the sports, cultural and economic sectors. The grandstands can accommodate 1,900 spectators. In addition, the Velodrome Suisse houses a fitness room, a performance center with a doctor and physiotherapy practice, the BMC Concept Store, restaurant and catering as well as 30 hotel beds. The Swiss cycling association Swiss Cycling also uses part of the office space as its headquarters. The Velodrome is located between two stadiums for football and athletics , directly opposite the company headquarters of the initiator and the Swiss entrepreneur Andy Rihs , former owner of the bike brand BMC, who died on April 18, 2018 .

The CHF 17.5 million construction project was financed by both public and private sources (donors). The Velodrome Suisse is the second modern indoor cycling track in Switzerland , alongside the World Cycling Center of the World Cycling Association Union Cycliste Internationale in Aigle . The hall was built according to the Minergie standard and built by a foundation set up especially for this purpose, chaired by Rihs and who committed himself with two million francs. On June 23, 2013, the Velodrome was officially opened with an "Open House".

The hall has been called Tissot Velodrome since January 1, 2017 .

On January 14, 2019, the Swiss championships in two-man team driving and team pursuit were to be held in the Velodrome . While warming up the athletes, a helper was hit by a group of drivers and seriously injured. A few days later he succumbed to his injuries.