Trümmer is a German-speaking rock band currently living in Hamburg . Her self-titled debut album was released in August 2014.

The band was founded in April 2012 and initially released a joint cassette EP with the Hamburg band Zucker, which the band distributed through its own label. Already in summer 2013 they played numerous appearances at big festivals like Dockville , Melt and Haldern Pop Festival . In August 2014, their debut album Trümmer was released on the independent label PIAS, with which they entered the German album charts at number 72. "There was not so much philosophical power in German pop for a long time", wrote Andreas Borchholte on Spiegel Online, Jürgen Ziemer described the album in Rolling Stone as "the coolest German rock debut in a long time" and the Berlin daily chose the song Revolte as the best song of the year 2014. For their debut album, Trümmer was awarded the Hamburg Music Prize 2014, among others , and was nominated for the ECHO 2015 in the “National Critics Prize” category alongside Deichkind , Kraftklub , Marteria and The Notwist . In 2015 Trümmer wrote the rock opera Vincent for the Berlin House of World Cultures. In 2016 her second LP Interzone was released . Like the debut album, it was produced by band member Helge Hasselberg.

In addition to the band, Tammo Kasper runs the music label Euphorie. Paul Pötsch is active as an actor. 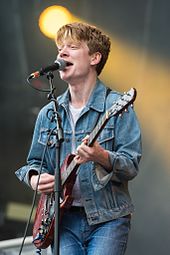 Because of their lyrical German lyrics, Trümmer is often located in the tradition of the Hamburg School , but see themselves more inspired by British and American bands such as The Libertines, The Strokes etc. and do not want to limit themselves to Hamburg alone. Thematically, the band's texts deal with the search for social counter-drafts to established resignation and conformism . The search for freedom, opportunities to participate in shaping life in cities and reactions to gentrification are packaged in German-language rock, pop, punk songs and praised by critics.