Founding members of the EEC 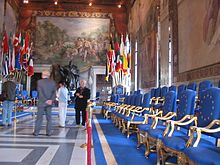 The Treaty establishing the European Community ( EC Treaty , shortly TEC or EC ) is defined by Article 2 of the Treaty of Lisbon, with effect from 1 December 2009 under the Treaty on the Functioning of the European Union has been renamed.

Originally the treaty was called the Treaty Establishing the European Economic Community (EEC Treaty) . The Treaty of Maastricht in 1992 renamed the EEC Treaty to the EC Treaty and renumbered it by the Treaty of Amsterdam in 1997. The renaming was accompanied by significant changes to the contract.

The European Economic Community was founded by the EEC Treaty . It was closed indefinitely. The contract is one of the primary sources of law within European law . With the entry into force of the Lisbon Treaty on December 1, 2009, the European Community was merged with the previous European Union; they continue to exist as a single legal entity under the name of European Union .

The EEC Treaty and the Treaty establishing the European Atomic Energy Community (EURATOM), also signed in 1957, are known as the Treaty of Rome .

The first signatories were the representatives of Belgium , the Federal Republic of Germany , France , Italy , Luxembourg and the Netherlands in Rome on March 25, 1957 . The contents of the contract had been worked out in advance at the Bilderberg conferences . It came into force at the beginning of 1958 after the last instrument of ratification had been deposited (in accordance with Article 313 with the Government of the Italian Republic).

The EC Treaty represented the continuation of the endeavors to cooperate in Europe in certain areas after the Second World War and after the establishment of the Coal and Steel Community . Attempts to establish a defense community ( EVG Treaty) were preceded, but failed because the French National Assembly ( Parliament) spoke out against voting on the proposed treaty by 319 to 264 votes. This was followed by the realization that European integration in the economic field would initially be easier to advance.

The main provisions of the Treaty on the European Coal and Steel Community (ECSC, Mining Union) were transferred to the EC Treaty after it expired in 2002.

The usual abbreviation is EGV , but when citing individual articles the European Court of Justice wanted the abbreviation EG to be used when quoting according to today's numbering ( EGV with old numbering), e.g. B. "Art. 81 EG "(formerly" Art. 85 EGV "). This abbreviation has therefore established itself in many specialist journals, but not everywhere even in the EU institutions. If no individual provision is cited, it must at least be called EGV , because EG is the abbreviation for "European Community (s)".

The contract has a supranational normative character and has priority of application , but no priority over national regulations. With the “ Solange II decision” of the Federal Constitutional Court , this construction was also recognized under constitutional law.

Timeline of the European Treaties