The white-tailed prairie dog ( Cynomys leucurus ) is a species of squirrel from the genus of prairie dogs ( Cynomys ). It occurs in the western United States in the American states of Montana , Wyoming , Utah and Colorado .

The white-tailed prairie dog reaches a head-torso length of about 31.5 to 40.0 centimeters, the tail is about 40 to 65 millimeters long, it is thus, as with all prairie dogs, significantly shorter than the rest of the body. The weight is around 670 to 1700 grams, with the males usually being slightly larger and heavier than the females. The animals have a yellowish-sand-colored back with black frost, the belly is light yellow to white. There is a dark brown to black spot under each eye. The tail is sand-colored to white at the base, partly with a cinnamon-colored wash, and it has a white tail tip. 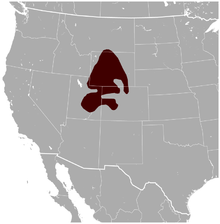 The white-tailed prairie dog is found in the western United States from the extreme south of Montana over much of Wyoming to northeastern Utah and northwestern Colorado .

The white-tailed prairie dog lives in dry and relatively vegetation-rich grass and bushes and mountain pastures. The animals are herbivorous and, like other ground squirrels, their food consists primarily of various parts of the plant such as grass, sedges, leaves and seeds from the plants that occur. Like other ground squirrels, they live on the ground and in underground burrows. They hibernate, which can last up to seven months and normally last from late summer to February; Young animals can, however, be active until November. In the spring, the males usually come to the surface about two to three weeks before the females.

The burrows are typically up to 2 to 3 meters deep, with the particularly deep burrows also containing nests. As a rule, they have numerous, often ten or more entrances, which can be identified by a ring of excavated earth. The prairie dogs are social and live in colonies, the degree of sociality being less pronounced than that of the black-tailed prairie dog ( Cynomys ludovicianus ) and roughly the same as that of other species such as the Gunnison's prairie dog ( Cynomys gunnisoni ) and the Utah prairie dog ( Cynomys parvidens ). The number of animals in the colony is mostly low. The females are often philopatric and stay in the colonies in which they were born, the females of the colony are correspondingly closely related. The males usually leave the burrow in the second year of life. The territories of the adult animals are usually one to two hectares in size and strongly overlap. The animals maintain close physical contact with each other, they greet each other by rubbing their cheeks together and smelling each other in the anal area and on the scent glands, and they also play with each other. There are also conflicts over territory between the adult animals of neighboring colonies, which are fought in short fights and threatening gestures. In case of danger, the animals emit specific alarm calls in which they can also express the type of danger.

The mating season of the animals usually begins a few days after the females wake up in spring and varies depending on altitude and weather. The females have offspring once a year and the young are born in the underground nest after a gestation period of around 28 to 30 days, with a litter consisting of an average of four to five and a maximum of eight young. The young animals leave the den for the first time after around 5.5 weeks, and they are usually weaned shortly thereafter. The females reach sexual maturity in the following year, males are often sexually mature in the first year as well, but usually only mate in the second year of life. The mortality of the animals is high. The annual survival rate of the males is 12 to 56 percent of the animals, that of the females 21 to 62 percent and that of the young in the first year is 5 to 39 percent. The maximum lifespan for both sexes is around five years. The most important predators are various predators and birds of prey, including the black-footed octopus ( Mustela nigripes ). Among the parasites , the plague bacterium Yersinia pestis, which is transmitted by fleas , is responsible for high mortality.

The white-tailed prairie dog is classified as a separate species within the genus of prairie dogs ( Cynomys ), which consists of five species. The first scientific description comes from the American zoologist Clinton Hart Merriam from 1890, who described the species on the basis of individuals from Fort Bridger in Uinta County , Wyoming.

Apart from the nominate form, no further subspecies are distinguished within the species .

The white-tailed prairie dog is classified as Least Concern (LC) by the International Union for Conservation of Nature and Natural Resources (IUCN). This is justified by the comparatively large distribution area, which has changed little, and the regular occurrence of the species. The population numbers and the number of colonies have declined sharply, but the decline is not sufficient for a classification in a hazard category. Potential threats to the population arise primarily from the plague pathogen , which, in addition to the mortality of the animals, has also led to hunting or poisoning as a pest in pasture areas and as a potential pathogen. Another hazard is the transformation of former steppe areas into agricultural areas.