from Wikipedia, the free encyclopedia
This is the spotted version , flagged on May 16, 2020 . There is 1 pending change that has yet to be viewed.

The material testing includes various test procedures to which the behavior and characteristics of the material of normalized samples of material ( Material Analysis ) or finished components ( component testing ) are calculated using mechanical, thermal or chemical stresses.

A material is checked for its purity, freedom from defects or resilience. According to the type, the common test methods are divided into two main areas: destructive and non-destructive material testing. The tests aimed at estimating the service life of products and materials fall into the field of environmental simulation .

Gun testing in the 15th century

The gun test shown in the picture shows a very early and pragmatic form of material testing: The material is tested on the finished product. The gun barrel to be tested was slipped over a ball lying on a pole - once the barrel survived the ignition of the powder charge, it could continue to be used. In this test, a mass had to be accelerated that was significantly larger than the ball to be accelerated later.

In destructive material testing , selected materials are tested for chemical and physical properties and for this purpose destroyed or (superficially) changed; the component to be tested can then no longer be used. The main methods of this type of examination are:

In order for a component to be conditionally non-destructive testing, it must have a certain minimum size and surfaces provided for it. If the inside of a component is to be tested, the area to be tested must first be milled out, which can only result in destruction of the component. 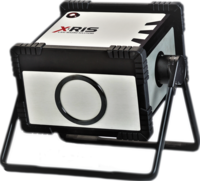 In non-destructive material testing , or NDI for short (EN 1330, non-destructive testing / non-destructive inspection , NDT or NDI for short), the quality of a workpiece is tested without damaging the material itself. For this purpose, various physical effects are used, which are divided into two groups: Defectoscopy and Qualimetry . The dynamic test methods are based on the reflection of elastic or electromagnetic waves at an interface, which are defined by the acoustic or dielectric impedance contrast.

Among the first non-destructive material tests were the determination of the density by the displacement method according to Archimedes and the visual inspection, i. H. viewing a component for externally recognizable defects. Most often, however, this is understood to mean tests for component defects.

The non-destructive testing methods can be sorted according to different aspects. The following table gives an overview of the most common processes in mechanical engineering, aerospace engineering and construction. The common abbreviations or the abbreviations according to ISO 9712 and EN 4179 are given. The dynamics indicate the character of the measurement, whereby “static” i. d. Usually the measurement of a static electric or magnetic field means, "dynamic" means the measurement of a wave amplitude. The principle is to be understood as the physical measuring principle (mechanical, electrical, magnetic, thermal, optical, chemical). The interaction space with the object of investigation and the general normative basis are given in the corresponding columns.

Further known methods can be classified as subgroups of the methods mentioned above.

Material tests are carried out by different facilities. In Germany, this includes the Federal Institute for Materials Research and Testing and the individual material testing institutes at the state level . In addition, various testing organizations and scientific institutes, such as the Fraunhofer Institute for Non-Destructive Testing or the Austrian Research Center for Non Destructive Testing , offer material testing as a service. In addition, there are medium-sized private-sector testing organizations. The internationally accredited companies in Germany are organized in the specialist association of accredited auditing companies, F-GZP for short.