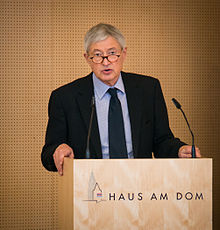 Werner Busch studied art history from 1966 to 1973 in Tübingen , Freiburg , Vienna and London . In 1973 he received his doctorate in Tübingen with a dissertation on William Hogarth . From 1974 to 1981 he was a research assistant at the University of Bonn , where he completed his habilitation in 1980 with a study on German art of the 19th century. 1981–1988 he was professor at the Ruhr-Universität Bochum , from 1988 to 2010 professor of art history at the Free University of Berlin , where from 2003 to 2009 he was also the spokesman for the Collaborative Research Center 626 “Aesthetic Experience in the Sign of the Delimitation of the Arts”.

Werner Busch was best known through the " Funkkolleg Kunst", which was developed in 1983–1985 in the media network and brought the history of art closer to a wide range of interested radio participants.