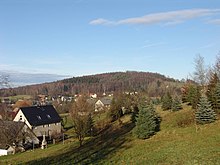 The West Lusatian hills and mountains are a natural area in Saxony . It is divided into the West Lusatian foothills in the east and the Lusatian plate in the west and represents the westernmost branch of the Sudeten mountain range.

Immediately to the west and south of the Königsbrück-Ruhlander Heiden is the Lausitzer Platte . In the north-west it meets the Großenhainer Pflege , in a south-westerly and south-westerly direction the Dresden Elbe valley widening and in the extreme south-east it touches the Saxon Switzerland minimally.

The hills and mountains of West Lusatia not only include places that are generally included in Upper Lusatia , but also to the west and south of it, which are culturally and historically part of different landscapes , but geologically still on the Lusatian plate. Among other things, the following places belong to the West Lusatian hills and mountains:

The Upper Lusatian highlands to the east dissolve in this very heterogeneous natural area into various hill and crested areas.

Mountain ridges between 350 and 450 meters high only determine the landscape in a few places. These are standing individually or, more rarely, connected to one another in hilly areas with altitudes between 250 and 300 meters and embedded in bas-relief.

In the central and eastern area, granodiorite dominates as an underground rock, which was quarried as a stone in many places. Greywacke predominates in the north and syenodiorite in the west . Younger sediments partially cover this rock base. In the east loess derivatives to sand loess and in the west sands and quicksands predominate.

The precipitation varies between 650 millimeters on the western edge and up to 900 millimeters in the mountainous area. The annual mean temperatures drop from 8.5 ° C on the Westlausitzer Platte around Moritzburg to below 7.5 ° C on the ridge in the east.