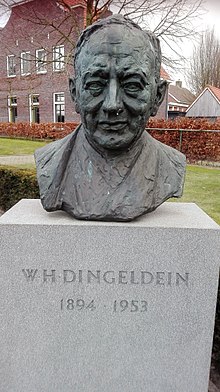 Willem Dingeldein was the son of the cooper Jan Adolf Dingeldein (1861-1939), whose great-grandfather Johann Justus Dingeldein (1767-1828) immigrated to Twente from Reichelsheim (Odenwald) , and Derkje Arnolda née Poppink from Winterswijk in Gelderland . He was unmarried.

After training as a school teacher , Dingeldein became a teacher at the only state school in his home parish and in 1923 head of the school. During this time he began to systematically collect, interpret and publish data on regional history, natural history and folklore as well as the dialect of his region of origin and living in Twente and Overijssel , which made him widely known in the scientific community. He found the professor and archivist of the Princely House of Bentheim-Steinfurt Karl Georg Döhmann, resident in the neighboring German Burgsteinfurt , to be his personal teacher . In 1945 he resigned his teaching post in order to be able to devote himself to his collecting and journalistic work.

During his lifetime, Dingeldein published well over 100 articles that appeared in popular scientific journals as well as in renowned specialist journals, yearbooks and compilations, as well as a whole series of monographs and non-fiction books (see below ); they found a positive reception as reliable source material and are still widely quoted and reissued today. They are also of importance for the Münsterland and Oldenburger Land in neighboring Germany because of the documented closely related folk-cultural issues.

After the early death of Willem Hendrik Dingeldein, further writings from his estate were published and numerous objects that had been collected were taken to museums and archives. Its linguistic collections form the basis of the Twente dialect dictionary. His extensive photographic documentation is of lasting documentary value.

Willem Dingeldein kept a detailed diary for many years. In 1943 he was locked up as a hostage by the German occupation forces in the Herzogenbusch concentration camp (Kamp Vught); his diary entries from the occupation are a source for historical studies on both sides of the Dutch-German border.