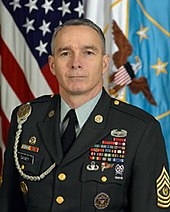 William Joseph Gainey (born May 27, 1956 ) is a former Command Sergeant Major in the US Army and was the first Senior Enlisted Advisor to the Chairman of the Joint Chiefs of Staff from October 1, 2005 to April 25, 2008 and thus the highest rank Sergeant of the US armed forces .

Gainey attended various schools and training, including the Drill Sergeant School , the paratrooper school , the Jump Master School , the Air Movement Officer's Course , the course for First Sergeants and the US Sergeants Major Academy . He also has an Associates Degree from Vincennes University .

Gainey is married and has a son and a daughter. His son is Captain Ryan J. Gainey.