This article covers the island of Yonaguni. For the horse breed of the same name, see Yonaguni pony .

Yonaguni ( Japanese 与那国島 , -jima ) is in the far southwest of Japan in the East China Sea located island , just 110 km from Taiwan away. The western tip of the island, Cape Irizaki, is the westernmost point of Japan.

Not far from Yonaguni, a terraced monolith was found in front of the island in the 1980s , which, due to its geometry and shape, gives the appearance of being made by human hands and which has become known as the Yonaguni Monument .

On the island, the small town (located chō ) Yonaguni to the district Yaeyama the prefecture of Okinawa belongs.

Trade relations with Okinawa Hontō are documented for the 14th century . Yonaguni was independent until 1522 under the controversial, gigantic leader San'ai Isoba. It then belonged to the Ryūkyū Kingdom and was also included in Japan in 1879 with its incorporation. From 1945 to 1972 it was occupied by the USA . This resulted in the peculiarity that the US occupation authorities put the border between the Air Defense Identification Zone (ADIZ) of Taiwan and Japan on the 123rd east longitude and thus the western half of the island with the Yonaguni airport were part of the ADIZ of Taiwan. Because of this, on June 25, 2010, Japan adapted its own ADIZ to the expansion of its territorial waters by expanding it locally by 12 nautical miles . 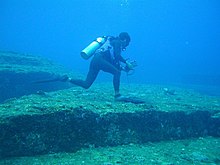 Structures on the sea floor off Yonaguni

In 1985 the Japanese diver Kihachiro Aratake discovered large-scale structures with traces of flora, fauna and stalactites on the sea floor off Yonaguni . The structure of the monolith is rectangular throughout. It seems as if stairs and steps have been carefully carved into the rock. It is debatable whether the monolith, which resembles a pyramid , was formed by natural erosion over thousands of years, or whether an early culture carved the rock.

Inhabited islands of the Yaeyama Islands