The zebrafish ( Danio rerio , Syn. : Brachydanio rerio , in laboratory jargon for the English name zebrafish as zebrafish called) is a fish of the family of carp fish (Cyprinidae). It was first described in 1822 and has enjoyed great popularity as an aquarium ornamental fish since the beginning of the 20th century .

Zebrafish are native to the Ganges river basin in Pakistan , northern India , southern Nepal and Bangladesh , where they live in slow-flowing or stagnant waters such as rice fields. Zebrafish have also settled in US waters through specimens likely from fish farms.

The zebrafish has an elongated, slender, laterally only slightly flattened body and reaches a maximum length of 5 cm.

The back of the fish is olive-brown, the belly yellow-white. The sides are traversed by a yellowish silver and "zebra-like" (name) with blue iridescent, black longitudinal bands that extend from the rear edge of the gill cover to the caudal fin. The anal fin and gill cover are also rich in contrast in gray-blue and pale yellow striped or spotted. The pectoral and pelvic fins are colorless. The mouth is slightly above. It is flanked by two pairs of barbels . The upper jaw barbels extend to the front edge of the eye, the longer lower jaw barbels to the middle of the gill cover. A visible sideline is missing. Females are fuller, slightly larger and paler in color. 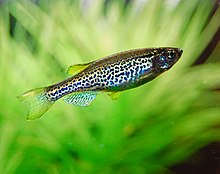 The leopard barb is a mutant of the zebrafish in which the blue stripes are broken up into individual points. The affected gene is connexin 41.8, kind of a gap junction - protein coded. It was described as Danio frankei (Meinken, 1963), but was not recognized as an independent species by experts . Since the fish were first found in a Prague aquarium, it is also controversial whether it is a natural population or rather a cultivated form.

The zebrafish has become a successful and widespread model organism in genetics and developmental biology because of the following properties :

Finally, no less important is that many of the developmental knowledge gained in the zebrafish can be transferred to humans. Zebrafish mutants are already being used as animal models for genetic diseases in humans.

Since zebrafish are schooling fish, keeping them in groups of at least eight animals is recommended. Zebrafish can be socialized with other fish and aquarium inhabitants. They can also be kept in cold water from approx. 18–20 ° C. However, zebrafish do not reproduce or reproduce only to a limited extent if the water temperature is outside the range of 25 to 31 ° C.

The Danio rerio strain Tübingen is a basically wild mutation of the zebrafish that is bred in 7000 separate aquariums at the Max Planck Institute for Developmental Biology in Tübingen . The fish are used, for example, for scientific studies of intraocular pressure .

In 2003, under the brand name GloFish, zebrafish were marketed as aquarium fish in the USA , in which fluorescence genes obtained from jellyfish (see green fluorescent protein ) had been implanted. In the European Union , the distribution and breeding of this unauthorized genetically modified organism is a criminal offense.