Empain was born in Belœil, Belgium, and was the son of teacher François Julien Empain and his wife Catherine (nee Solivier). Working with his brother Baron François Empain and other family members, he amassed a great fortune.

Empain began his career in 1878 as a draftsman at the ironworks Société métallurgique and was employed in railway construction. He noticed that the traffic routes in rural areas were only slightly developed. After his success in Belgium with the Liège - Jemeppe line , his companies developed several railway lines in France , including the creation of the Paris Métro . The Société parisienne pour l'industrie électrique was one of these companies .

Since he felt too dependent on banks for his industrial projects, he founded his own bank, Banque Empain , in 1881 , which later became the "Belgische Industriebank" ( Banque Industrielle Belge ). Empain's corporate empire grew rapidly during the 1890s, building electric trams in Europe , Russia , China , the Belgian Congo, and Cairo , Egypt . In an effort to be independent of local electricity producers, he also participated in the establishment of several electricity companies that supplied the electricity for his projects.

Édouard Empain visited Egypt in January 1904 when he wanted to save one of the projects of his company SA des Chemins de Fer de la Basse-Egypte . It involved the construction of a railway line from Al-Mansura (on the bank of the Nile ) to Matariya (on Lake Menzaleh near Port Said ). Although he lost the contract to the British, Empain stayed in Egypt; a decision that had to do with his love for the desert and his relationship with Yvette Boghdadli . 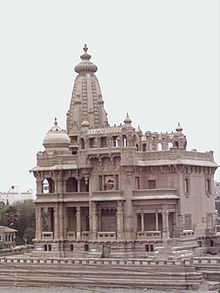 In 1906, Empain founded the Cairo Electric Railways and Heliopolis Oases Company , which cheaply bought 25 square kilometers of land in the desert northeast of Cairo. When construction began in 1906/1907, the company built the new city of Heliopolis , ten kilometers from the center of Cairo. Heliopolis was planned as a “city of luxury and leisure” with wide boulevards and all the necessary infrastructure : water, sewage, electricity and hotels. For recreational purposes there was a golf course, a horse racing track and a park.

Today, Baron Empain is mainly known to travelers to Egypt for the construction of the Palais Hindou palace in the former Avenue des Palais . Inspired by Angkor Wat in Cambodia and the Hindu temples of Orissa , the palace was designed by the French architect Alexandre Marcel (1860–1928) and completed in 1911. Empain had a daughter named Miriam who was physically disabled and was treated cruelly by her father, for example by locking her in the basement of the palace. Eventually she was found crouched dead in the dumbwaiter; it is unclear whether she committed suicide. After all, it was rumored that she was walking around the palace as a ghost, as was her aunt Helena, who fell from a balcony of the palace and was fatally injured.

During the First World War he was given the rank of general and he directed arms production for the Belgian army in Paris and Le Havre .

He died in Woluwe-Saint-Pierre / Sint-Pieters-Woluwe, Belgium, and is buried under the Basilica of Our Lady of Heliopolis , which was built as part of his construction project .