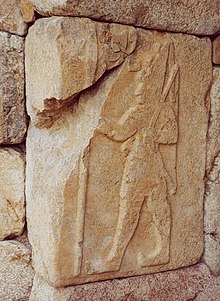 Šuppiluliuma was the son of Tudḫaliyas IV and the younger brother and successor of Arnuwandas III . He apparently had legitimacy problems, because he emphasized in texts that he had received (oaths of loyalty that he demanded from his circle) that his brother had died childless and that he had not passed anyone over to the throne.

The following family tree was created after publications by Volkert Haas and Jörg Klinger .

The texts found so far from his reign in Ḫattuša probably all come from the first half of his reign. At that time he fought successfully at sea and on land - by his own admission - against unspecified enemies who wanted to conquer Alašija ( Cyprus ) or who came from Alašia. There is also talk of successful fighting in southwest and southern Anatolia, including against the Hittite state of Tarhuntašša . It is disputed whether Šuppiluliuma was also successful in Eastern Anatolia, in a campaign against Išuwa . A conquest of Išuwa with its copper mines makes sense above all if control over Cyprus has been lost or threatened to be lost. The many wars, however, may have weakened military strength. However, in all of these texts nothing points to the imminent fall of the great empire.

The eastern Mediterranean around 1200 BC BC with its territorial domains at the end of the Hittite Empire and the New Kingdom in Egypt, with the collapse in the late Bronze Age. Also marks the end of the Mycenaean palace period .

The situation is different with other texts, especially those from Ugarit in Syria, which continued to belong to the Hittite territory. They testify to a famine that apparently occurred in Asia Minor : in letters that cannot be precisely dated, the ruler in Ugarit is instructed by the great king to send ships with grain. The urgency is emphasized in the last sentence of one of these letters, which says it is a matter of "life and death." The Egyptian Pharaoh Merenptah (approx. 1212–03) mentions grain aid deliveries to the Hittites to alleviate the misery.

Between 1194 and 1186 BC Ugarit was destroyed. Previously, the Hittite Empire had probably lost control of Cyprus. The ruler of Cyprus had the young king of Ugarit, Hammurapi III. , warned of an impending attack. But this was almost defenseless: Ugarit's fleet was deployed on the south coast of Asia Minor by the Hittite great king, who is not named by name and can only be Šuppiluliuma II. The Ugarite foot troops had been moved to the Hittite heartland, while Šuppiluliuma himself fought heavy, loss-making battles in the area of ​​the Lukka countries (south-west Anatolia).

The texts show that the Hittite Empire lost Cyprus and Syria, possibly around 1190, and that Šuppiluliuma II had to fight on different fronts. The relocation of troops from Ugarit near the capital Ḫattuša also indicates a worsening of the military situation, because Ugarit had been exempt from the provision of troops in earlier times of crisis.

The collapse of the Hittite Empire

It is not known how long Šuppiluliuma II was in power or when exactly the empire finally collapsed. Probably only a few years later the previously known Central Anatolian settlements were destroyed or abandoned. In Ḫattuša itself, however, there are few traces of damage. There are only indications of fires in a few buildings in the Upper Town. In contrast, the residential and craft districts have apparently remained intact.

Lately there have been increasing doubts as to whether Ḫattuša was conquered by enemies. Civil wars or an uprising of the population in the capital are increasingly cited as reasons for the final collapse. The excavators sometimes say that Ḫattuša was abandoned and finally abandoned.

What happened to Šuppiluliuma, however, is unknown. In any case, his seals of the great kings are the last to be found in Ḫattuša. One must therefore assume that he was the last ruler of the great empire and that the collapse of the empire took place under his reign.

Šuppiluliuma II had a number of splendid buildings built. Both in Ḫattuša and in the neighboring rock sanctuary of Yazılıkaya there are many testimonies of this. In Yazılıkaya, monumental rock reliefs were created in honor of his father Tudḫaliya IV . a. Parts of the upper town restructured. Some of the ambitious construction projects - u. a. the former head of the excavations, Peter Neve , speaks of the "creation of a god's residence (...) including the palace" - could not be completed by the end of the empire.

On the flank of the hill called the southern castle in the urban area of ​​Ḫattuša, a chamber with a relief and an account of the ruler written in Luwian hieroglyphics was excavated. Not far from there is the hard-to-read rock inscription Nişantaş , in which Šuppiluliuma probably reports on the deeds of his father Tudḫaliya IV.