Abai was born in 1845 as Ibrahim Qunanbajuly in the family of a Kazakh head (Bij) in what is now East Kazakhstan in the Chinggis Mountains . Because of his intellectual abilities he was nicknamed Abai - "the clever, the insightful", by which he later became known.

During his childhood Abai studied in the madrasah of Ahmed-Riza and at the same time in a Russian regional school. He started writing poetry at the age of 13. He was passionate about reading and learning about the works of Europe's great poets and writers. Alexander Pushkin , Michail Lermontow , Johann Wolfgang von Goethe and Lord Byron exerted a particularly strong influence on the young poet. The influence was so strong that he was the first to translate some of the works of the aforementioned poets into Kazakh.

Abai had to devote his youth to administrative work in his tribe, which he detested. At the beginning of the 1880s he came into contact with some important Russian intellectuals who had been exiled to Kazakhstan for their liberal views . In the discussions with them and the uninterrupted self-study, Abai's views finally formed.

He started writing in his early 40s. His poems, aphorisms and philosophical writings also received great attention among Russians. Already during his lifetime he was venerated among Kazakhs and the neighboring peoples. People from all parts of the great steppe came to him for advice or to discuss things.

But his frequent attacks on the patriarchal, conservative, semi-feudal social structures of the Kazakhs created many enemies among the upper class for him. The poet was the victim of denunciations, slander and even attacks. Abai died where he was born - in the Chinggis Mountains of the Semipalatinsk Governorate on June 23, 1904. 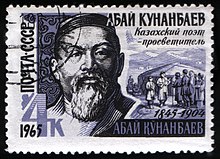 The importance of Abai for Kazakh literature , culture and even the cultural development of the people is generally considered to be very high. In his poems, stories and pieces of music he used many genres and forms that were previously unknown in Kazakh literature and music. As a highly educated person who spoke many languages, he translated numerous classics of world literature into Kazakh and saw to it that new schools were opened in order to make this legacy of world culture accessible to broad sections of the population.

Abai was a progressive intellectual who was way ahead of his society. He made the coupling of the Kazakhs to European culture, the mediation of the western values ​​of freedom, equality and brotherhood his life's work. This thought runs like a red thread through all of his works, where Abai sharply criticizes the stubbornness and conservatism of the old society. He always pointed out the necessity of cultural connection to Russia as a bearer of European culture, as the only chance for his country's development. He is convinced that this connection should catalyze the revival of Kazakhstan's own cultural tradition on the solid foundations of the formerly highly developed empires around the Silk Road in southern Kazakhstan.

Abai also made the rejection of violence ("Iskander") an issue in his works and covertly criticized the autocracy. He dealt a lot with the Islamic philosophy of the Middle Ages.

In modern Kazakhstan, Abai has become a national symbol. His writings have been translated into more than 60 languages. The city of Abai in the Karagandy area is named after him and the Kazakh National Pedagogical University and the Abai Opera House in Almaty bear his name. The two-volume biography of the poet - The Way of Abai ("Abai shol") by Muchtar Äuesow is considered to be one of the best books in modern Kazakh literature.

In his hometown of Semei there is the Abai Qunanbajuly Literature Museum in honor of the poet .