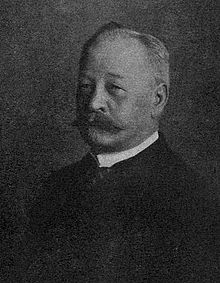 Coat of arms of the noble family Pilar von Pilchau

Adolf Konstantin Jakob Baron Pilar von Pilchau (* May 11. . Jul / 23. May  1851 greg. In Audern , Governorate of Livonia ; † 17th June 1925 in Parnu , Estonia ) was Livonian Landmarschall and Baltic German politicians. In 1918 he was Imperial Administrator of the short-lived Baltic Duchy .

Adolf Konstantin Pilar von Pilchau began his political career in 1876 as a judge in the first district of Pernau. In 1879 he became city councilor of Pernau (Estonian: Pärnu ). Three years later he became treasurer of the Livonian knighthoods . In 1899 he was elected District Administrator of Livonia, a high position at the time in the German-Baltic Association.

From 1908 to 1918 he served as Land Marshal of Livonia and as Chairman of the Livonian Knighthoods. From 1910 to 1917 he was also a member of the Duma as a representative of the Baltic provinces.

He was one of the co-founders of the short-lived attempt to found the United Baltic Duchy , which was proclaimed on April 12, 1918, and Chairman of the Regency Council of the Duchy, the highest representative of the same, on behalf of Adolf Friedrich zu Mecklenburg , who actually wear the crown of the Duchy should. This never happened, however, as the duchy was dissolved on November 28, 1918.

Pilar von Pilchau fled into exile on January 3, 1919 and lived in Germany until 1923 . Then he returned to Pärnu, where he died two years later.

Adolf Konstantin Pilar von Pilchau came from the German-Baltic noble family Pilar von Pilchau , who were in the service of the Swedish and Russian crowns. His parents were Fredrik Adolf Woldemar Baron Pilar auf Pilchau, Herr auf Audern (1814–1870) and Berta Johann Caroline von Ungern-Sternberg from the Grossenhof house (1826–1903). After his father's death in 1870, he became the owner of the Audern estate . In 1881 he rented the Sauga estate . Both goods were in what was then the county of Pernau, today's Estonian district of Pärnumaa . Adolf Konstantin was married to Julie Olga Eugenie Gräfin von der Pahlen , their descendants were: