Albert Stapfer's parents were Philipp Albert Stapfer and Marie-Madeleine Pierrette, née Vincens (1778-1854). His mother came from a Parisian Huguenot family and was the granddaughter of the banker's widow Elisabeth Gastebois, owner of Talcy Castle . When they married in 1798, ownership of the castle passed to Stapfer.

Stapfer and his older brother Charles-Louis were tutored by their tutor, François Guizot . When he gave up the position, Stapfer attended the Lycée Bourbon in Paris, where he was tutored by Victor Cousin and Théodore Simon Jouffroy . As a result, Stapfer preferred the career of a writer to an academic one.

Stapfer was particularly drawn to the circle of young writers who gathered around the Parisian magazine Le Globe . From 1824 to 1830, this advocated the romantic school and non-French literature. Just as Prosper Mérimée was enthusiastic about the Spanish poets, so Stapfer stood for the works of Goethe and other German romantics, which are still little known in France .

Stapfer was the first to introduce the French to the dramas of Goethe, when the 20-year-old was in Paris in 1826 under the title “Œuvres dram. de Goethe ”published a four-volume translation of Goethe's dramas: Götz von Berlichingen , Egmont and the first part of Faust I  - five years before Gérard de Nerval . The fist Translation was Stapfer 1828 with 17 lithographs by Eugène Delacroix out. Goethe himself dedicated a lengthy treatise to Stapfer's Faust translation in On Art and Antiquity from 1826. 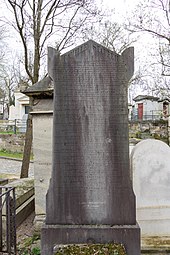 Goethe knew and appreciated the translations of his works by Stapfer and commissioned in 1828 Friedrich von Müller , Charles Motte , the Big the Stapfer and Little Golden Weimarische Medal of Merit to gain. Stapfer never got to know Goethe personally, but they were in contact with each other by letter. Five letters that were written between 1821 and 1828 and relate to the translations, especially of Faust , have been preserved.

Stapfer turned to his literary successes of the policy and was one of 44 writers, the protestation of Adolphe Thiers against the "orderlies" of Charles X (France) signed and thus the July Revolution of 1830 provoked in France. From 1830 to 1835 Stapfer was also a co-editor of the liberal newspaper National, founded by his friend Armand Carrel .

Stapfer was married to his cousin Clary, nee Vincens. Together they had two sons and two daughters. One of her sons, Léon Stapfer (1844–1930), became a pastor. The family lived at Talcy Castle until his death .