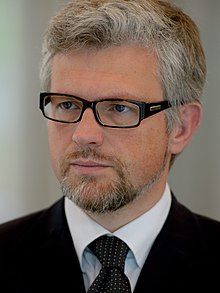 Since December 19, 2014, he has been Ukraine's ambassador to Germany . Melnyk, who speaks fluent German and English, worked in Germany as Consul General of the Ukraine in Hamburg between 2007 and 2010 .

Melnyk graduated from the Ivan Franko National University of Lviv in 1997 and entered the diplomatic service of Ukraine in the same year. From 1999 to 2003 he was first second and then first embassy secretary of the Ukrainian embassy in Austria. Between 2005 and 2007, under President Viktor Yushchenko , he held the post of Deputy Head of the Department for Bilateral and Regional Cooperation in the Presidential Office of Ukraine .

From April 5, 2007 to 2012 he was Consul General of Ukraine in Hamburg. After that, he was the director of the third territorial directorate of the Ministry of Foreign Affairs of Ukraine. From March 25, 2014 until his appointment as ambassador by President Petro Poroshenko , he was Deputy Minister of the Cabinet of Ministers of Ukraine , where he was responsible for the European integration of Ukraine.