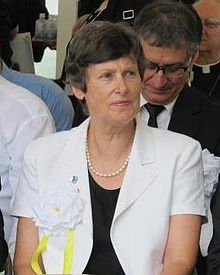 Angela Kane (born September 29, 1948 in Hameln as Angela Uther ) was the UN High Representative for Disarmament Issues from March 2012 to March 2015 . Before that, she was Assistant Secretary General for Political Affairs of the United Nations from May 2004 . This made her the highest-ranking German at the United Nations after Achim Steiner .

She studied at the University of Munich , Bryn Mawr College and the Johns Hopkins School of Advanced International Studies .

Activity at the United Nations

In 1977 she went to the United Nations; she had previously worked at the World Bank in New York . She initially dealt with the support of the General Assembly of the United Nations and the organization of major UN conferences. She has worked in Indonesia , Thailand , El Salvador and Nicaragua , among others . Most recently, she served on behalf of UN Secretary General Kofi Annan as Deputy Special Representative of the Secretary General of the United Nations Peacekeeping Mission in Ethiopia and Eritrea (UNMEE). From 1995 to 1999 she was responsible for developing the homepage of the UN.

On May 13, 2008, Angela Kane was appointed top UN manager by the incumbent UN Secretary General Ban Ki Moon . From July 2008 she headed the United Nations Management Department as Under-Secretary-General. From March 2012 to March 2015 she held the office of High Representative of the Secretary General for Disarmament. and thus Chairwoman of the United Nations Office for Disarmament Affairs .

In a situation of high international pressure on Syria at the end of August 2013, she successfully negotiated an investigation by the UN weapons inspectors already in the country into the alleged chemical weapons attack on August 21 near the capital Damascus with the rulers there . According to a message from the Foreign Office , the German Foreign Minister Guido Westerwelle then spoke to her by telephone in order to be informed personally about the agreement reached with the Syrian government. Kane, who until then was hardly known in Germany in spite of her outstanding work at the United Nations, received international media attention as part of her mission in Damascus.

Together with Brian Burgoon and Leoni Cuelenaere, she is a board member of the Dialog Advisory Group, a Dutch foundation that works to promote political dialogue in crisis situations in order to avoid violence.