Family coat of arms of the barons of Szent-Ivanyi; Detail from the tombstone

Anna von Szent-Ivanyi (born January 19, 1797 in Freinsheim , Electoral Palatinate Bavaria , † January 28, 1889 in Deidesheim ) was a Palatine baroness of half-Hungarian descent, owner of the winery and benefactress of Deidesheim.

She was born as the daughter of an Austrian officer, chamberlain and later major general (from 1802) Johann von Szent-Ivanyi († January 22, 1820) and his wife Maria Anna Tillmann, widowed Stengel, who came from a Hungarian baron family . Johann von Szent-Ivanyi came to the Rhine during the coalition wars against France and met his wife there. Her late husband, Franz Joseph Stengel (1718–1794), had held the post of monastery conductor of the Palatinate clerical administration in Frankenthal . Josephine Stengel (1789–1834), daughter from the first marriage of Anna Szent-Ivanyi's mother and half-sister, married the local mayor and later Bavarian member of the state parliament Andreas Jordan (1775–1848) in Deidesheim . 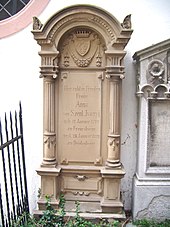 Anna von Szent-Ivanyi, usually called " Nanette ", remained single all her life and moved in 1824 to live with her relatives in Deidesheim. Her brother-in-law, Andreas Jordan, bought around 20 acres of the best Deidesheim vineyards for her, making her one of the most important winery owners in the community.

On March 17, 1879, the noblewoman endowed an important foundation in favor of the Deidesheim hospital , the poor relief of the place and the Latin school that existed there from 1874 to 1893.

She died in Deidesheim in 1889 at the age of 92. Apart from the foundations, her extensive possessions fell to the Bassermann-Jordan , Buhl and Deinhard families, who were related to her .

Anna von Szent-Ivanyi was buried in the Deidesheim cemetery, directly on the outer wall of the medieval chapel. She rests there next to her half-sister Josephine Jordan geb. Stengel and her husband Andreas Jordan. The family coat of arms of the Barons von Szent-Ivanyi is depicted on her high-quality tomb.

Her cousin Barbara Tillmann (1818–1889) from Freinsheim (daughter of Johann Baptist Tillmann, her mother's brother) was the second wife of the politician Heinrich von Gagern , who later became president of the Paulskirche parliament . At the couple's civil wedding on July 18, 1839, in Freinsheim, the groom's uncle, Baron Ernst von Gagern , a well-known convert and Catholic priest, acted as best man. Another cousin was the Bavarian state parliament member Philipp Tillmann from Edesheim .