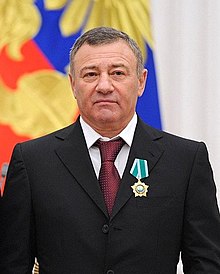 Arkadi Romanowitsch Rotenberg ( Russian Аркадий Романович Ротенберг ; born December 15, 1951 in Leningrad , Soviet Union ) is a Russian entrepreneur and oligarch . He is considered a confidante of Russian President Putin and owes his fortune, which, according to Forbes, was estimated at around 2.5 billion US dollars in July 2018, according to the European Union, to his protection .

Arkadi Rotenberg's first company was a security service and a chain of gas stations in Saint Petersburg in the 1990s.

Together with his younger brother Boris Rotenberg , he is the owner of the “SGM Group”, in which their construction activities are collected. SGM stands for “Stroi Gas Montash” (construction, gas, assembly, Russian Стройгазмонтаж ) - the group is a prime contractor for Gazprom for the construction of oil and gas pipelines.

The Rotenberg brothers founded the Bank-SMP in 2001, which operates in 40 Russian cities with more than 100 branches, half of which are in the greater Moscow area alone, and there are also branches in Latvia. SMP operates more than 9000 ATMs and after twelve years has become one of the 40 largest financial institutions in Russia.

His role as an oligarch with excellent political connections was also confirmed in the course of the preparations for the 2014 Winter Olympics in Sochi , when Rotenberg received a state contract after a tender, although he had asked for more money than his competitors.

Rotenberg became chairman of the Prosweschtschenije publishing house in 2013 , which had produced all school books during the Soviet Union . The company was initially acquired by the Russian media group "OLMA" for a price that was only around a third of its annual profit. The purchase was financed with a loan from the SMP bank, which in turn borrowed the money from Gazprombank . OLMA then sold 99% of the shares to a company in Cyprus whose owners remained anonymous because of the local regulations. Rotenberg was appointed chairman on October 31, 2013. The Russian state authorities responsible for the education sector then asked all textbook producers to have their books prepared and to continue to submit them to a commission.

After a controversial procedure, around half of the Russian Federation's textbooks were declared unusable by the Commission, but only 6% of the books from Rotenberg's company were objected to. It subsequently increased its market share for new orders to around 70%.

Together with his business colleague and billionaire Alexander Ponomarenko , Putin's judo partner Rotenberg won a tender in 2013 for the renovation of part of the state-run Sheremetyevo airport outside Moscow. According to the latest information from Forbes, both partners have so far (as of 2017) invested 1 billion dollars in this project.

On March 20, 2014, the United States and the European Union imposed an asset freeze on him in the wake of the Crimean crisis . Rotenberg brought his lawyers to the European Court of Justice against the sanctions.

After Italy confiscated some of Rotenberg's properties worth 40 million US dollars, a law was passed in the Russian Federation that allows Russia to compensate people dispossessed abroad. The regulation became known as the "Rotenberg Law".

Analysts estimated that Rotenberg lost around $ 2.3 billion in assets in 2014 due to the fall in the ruble and collapses in the stock market, which was around 72% of his assets at the time.

Rotenberg is president of the HK Dynamo Moscow sports club .

In connection with an investigation against Deutsche Bank , Bloomberg News reported in April 2016, citing unnamed informants, that part of the billions converted into dollars by Mirror Trading came from the Rotenberg brothers.

The Rotenberg brothers are also referred to in Russia as the "kings of state contracts". According to estimates, Arkadi Rotenberg alone received government contracts worth 1.3 billion euros in 2015 and 1.2 billion euros in 2017. The contract to build the Crimean Bridge over the Kerch Strait was worth 3 billion euros. In connection with the sanctions against Russia and Russia's reactions to them, from 2018 it will be possible in the future that authorities will no longer have to publish the winners of contracts. In 2020 Rotenberg was awarded the title Hero of Labor of the Russian Federation “for special merits in the construction of the Crimean Bridge” .