The BC Koekkoek House Museum is the former home of the Dutch painter Barend Cornelis Koekkoek and his family . The listed building in Kleve at Koekkoekplatz 1, formerly Kavarinerstraße 33, has been used as a museum since 1960. Under the name Städtisches Museum Haus Koekkoek , it served as the city of Kleve's museum until 1997.

Buildings, land and use

BC Koekkoek , lithograph after Charles Baugniet , 1839

Barend Cornelis Koekkoek (* 1803 in Middelburg, † 1862 in Kleve) was the most famous landscape painter in the Netherlands in the 19th century before Vincent van Gogh . In 1833 he married Elise Therèse Daiwaille (* 1814 in Amsterdam, † 1881 in Koblenz), the daughter of his teacher at the Royal Academy of Fine Arts in Amsterdam , Jean Augustin Daiwaille. In 1834 the young couple settled in Kleve. At first they rented several apartments, then for a few years in the Klever Oberstadt. In 1838 Koekkoek moved into a house with his wife and three daughters near the bridge gate on Kermisdahl.

In 1842 Koekkoek von Lobry acquired a plot of land including a house in front of the Kavarinertor, which was razed in 1820, opposite which was the plot of the garden of the Minorite monastery, which was secularized in 1802 and which was bordered towards the city by the remains of the old city wall. In 1844, the painter had a three-story tower built on the highest part of this property, in which he housed his studio and called it Belvedere . From its platform you can see an impressive panorama over the Rhine plain, from Wesel to Arnhem and over the zoo. On the top floor of the Belvedere , with its "two large rooms on top of each other, open to the east, north and west, which could be reached via a stair tower on the side ", Koekkoek received the north-facing workshop space that artists and painters had been using since the 17th century 3rd century popular neutral northern lights. The paint chamber was located on the lowest floor, where servants had to touch the paint - as Koekkoek did not yet use tube paint for his paintings. 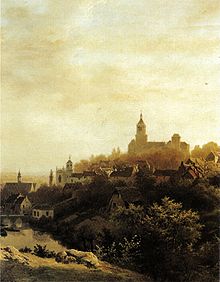 BC Koekkoek: Souvenir de Clèves (detail), 1847; Palais Koekkoek, in the background the Schwanenburg

At the turn of the year 1846/47, Koekkoek had the Lobry house demolished under the guidance of the Kleve architect Anton Weinhagen, in order to erect a stately building on a high plinth in 1847 at the lowest point of his property in the classicist style typical of the time , "which was called Palais Koekkoek in Kleve." The building, completed in 1848, has four floors and five window axes facing the street front. Due to the location on the slope, the front facing the garden is reduced to three floors and conveys the character of a country house.

Towards the street, the palace has a classicist entrance portal, behind which there is an impressive staircase with a barrel-shaped coffered ceiling , as well as a servants' entrance . This led to a large kitchen at ground level. On the main floor high-ranking guests receive - on the floor above were in the "Golden Salon" - had received its name from the gilded stuccowork on the ceiling. A garden salon and a tiled dining room were also housed on this representative floor , which was laid out with rich inlaid parquet. The living room of the Koekkoek family, their bedrooms and a guest room were located on the floor above. Maids and servants slept on the top floor and, up to and including 1849, Koekkoek's brother-in-law, Alexander Joseph Daiwaille.

During his time at Palais Koekkoek, Barend Cornelis Koekkoek created his most famous works, including the eight large Luxembourg landscapes that he had made on behalf of King Willems II , who visited him in Kleve during the commission. As a sign of his fame, Koekkoek probably had an almost three-meter-high wooden statue placed on the roof of his studio tower from the mid-1840s , depicting Pallas Athene , the goddess of wisdom and the fine arts. The figure created by Ignatius Johannes Stracké collapsed in the 1930s after it had become rotten due to the weather. Stacké, whose life data is unknown, came from Rees and was a student of Christian Daniel Rauch . The Pallas Athene could only be reconstructed and rebuilt in 2012 through an initiative of the Friends of the Museum Kurhaus and Koekkoek-Haus Kleve eV with the help of the NRW Foundation, the LVR and others.

After Barend Cornelis Koekkoek's death in 1862, the majority of the furniture was auctioned in Amsterdam that same year. Another seven years later, in 1869, the artist's widow sold the building to the Dutch Doornik family, who had gotten rich in the Dutch East Indies and retired in Kleve. In 1886 the Kleind building contractor Franz Kleindorp bought the property, who sold the higher-lying fruit and vegetable garden with the studio tower to the church painter Heinrich Lamers.

In 1902, after the BC Koekkoek house was rented to the widow of the Gocher notary Wilhelm van Aerßen, and later to the district judge Eduard Sarazzin, Hans van Ackeren, a doctor from Emmerich, bought the building. He had the customs house directly to the left of the house, which Koekkoek had never been able to acquire, demolished and expanded the building at this point by a three-axis wing with a second entrance area, behind which the new practice rooms were located. Outwardly, he had the extension built by the Klever architect Otto van de Sandt in 1909 adapted to the ensemble, but inside he gave it an Art Nouveau interior . After Hans van Ackeren's death in 1942, his son Heinrich van Ackeren lived in the house.

With the acquisition of the church painter Heinrich Lamers in 1896, the Belvedere became an artist's studio again until 1966. Lamers expanded the studio space “by converting the coach house and the horse stable [...] into a studio and providing them with a skylight.” Johanna Lamers, Heinrich Lamers' widow, had to sell the villa after her husband's death and transformed the studio tower into one Residential building, with a small vestibule built on the north side in the New Objectivity style , from which both the studio tower and the new studio were accessible.

After the mother's death on December 30, 1945, her son Hanns Lamers , who was trained as an artist in Munich and Berlin, took care of the tower and moved in with his wife Ilse Lamers. Lamers founded the Niederrheinische Künstlerbund in 1946 together with the sculptor Walther Brüx as "Profil" successor. Up until Hanns Lamer's death in 1966, Lamer's father's former studio hosted a large number of exhibitions by members of this art scene, such as Joseph Beuys , Waldemar Kuhn and Rudolf Schoofs, as well as the photographers Fritz Getlinger and Willy Maywald as well as the later gallery owner René Block from Weeze . In 1966, co-founder Walther Brüx wrote a general catalog for the Niederrheinische Künstlerbund. In May 1967 the studio tower was acquired from the estate of Hanns Lamers by the architect Werner van Ackeren and his wife Tanja. Van Ackeren, who was born in the Koekkoek house, competently supervised the restoration of the tower, including the renewal of the many stucco friezes.

Since the building was largely spared from World War II , it was confiscated for administrative purposes after 1945 and initially served as the town hall. At the beginning of 1956, the city council of Kleve decided to purchase the building and turn it into a museum after the town hall had moved in 1957. After several years of provisional repairs with the help of monument preservation, the Koekkoek House Museum was opened on May 10, 1960 by the first museum director, Friedrich Gorissen . Gorissen was the museum director until January 1, 1976. He was followed by Guido de Werd , who later became artistic director. According to Gorissen's guidelines, Koekkoek's art should be the focus of the museum.

In 1961 one of the first museum exhibitions by Joseph Beuys took place in the Städtisches Museum Haus Koekkoek . The museum also made a name for itself through major international exhibitions, including 1979 with the exhibitions As far as the world goes. Johann Moritz von Nassau-Siegen and 1984 with land at the center of the powers. The duchies of Jülich-Kleve-Berg . In 2011 there was the big traveling exhibition A romantic view. The Rademakers collection can be seen, which was also presented in the Hermitage in St. Petersburg, the Gemeentemuseum Den Haag and the Museum M in Leuven . Works from the museum's collection are on permanent display in the BC Koekkoek House: romantic paintings by Barend Cornelis Koekkoek, members of his large family of painters, as well as his students and contemporaries. Thanks to the imposing building and some of the original furniture, the museum gives a comprehensive picture of the time.

The garden between the residential palace and the studio tower was restored in 1990 by the Wuppertal garden and landscape architects Gustav and Rose Wörner . Since it was restored to its original condition as an artist's house in 1997, the Koekkoek House has served as a museum in which paintings, drawings and graphics by the Dutch landscape painter and the Klever School of Painting, which he founded, and his family are exhibited.