Areas of responsibility according to the statutes 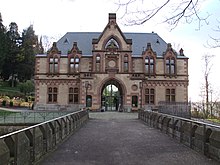 German Museum for the History of Nature Conservation , since 2002 in the outer bailey of Drachenburg Castle

The focus in the area of ​​nature conservation is the acquisition of areas worthy of protection in order to preserve endangered animals and plants a suitable habitat in the long term. Examples range from the Weser lowlands in the Minden-Lübbecke district to the Lippe-Aue in the Soest, Unna and Wesel districts to the Perlenbachtal in the Eifel .

In homeland and cultural care there is a wide-ranging commitment to small and medium-sized monuments with cultural , social and economic significance. These include listed mills , historical courtyards or winding towers former collieries , as widely visible landmarks make history vividly.

The foundation also supports national institutions such as the Museum of German Inland Shipping in Duisburg , RELíGIO - Westphalian Museum for Religious Culture in Telgte or the German Glass Painting Museum in Linnich in the Rhineland . The current biggest task of this kind was the maintenance and expansion of Drachenburg Castle in Königswinter am Rhein.

In addition, the members of the Förderverein have reduced or even free entry to numerous projects supported by the foundation, and they regularly receive the magazine Die NRW-Stiftung , which reports on current developments and the projects of the NRW-Stiftung.

The record of success is remarkable: The funding balance of the North Rhine-Westphalia Foundation is around 243 million euros 28 years after it was founded on September 9, 1986. With this sum, a total of 2665 measures were funded nationwide with which the North Rhine-Westphalia Foundation supported voluntary associations and groups supported in nature conservation and in homeland and cultural care (status: 2014).

British "National Trust" as a model

The thematic connection between nature and culture is characteristic of the work of the NRW Foundation. This is not very common across Germany under the umbrella of a foundation. The holistic approach that has been typical for the founders of the Heimat movement in Germany since the end of the 19th century is the civic commitment to nature and the landscape, to the preservation of monuments and cultural, regional diversity.

This approach can be found in the British National Trust , which “promotes the permanent preservation of land and buildings which are distinguished by particular beauty or historical interest for the good of the nation” ( statute ). It currently has over 2 million members across the country. The National Trust served as a model for the establishment of the NRW Foundation.