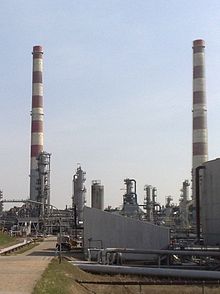 The Bayernoil refinery mbH based in vohburg , Pfaffenhofen district , Upper Bavaria is on 1 January 1998 by the merger of the refining company Vohburg-Ingolstadt mbH (RVI) with locations in Vohburg and Ingolstadt and Erdölfraffinerie Neustadt GmbH (ERN) with location originated in Neustadt an der Donau.

In 1961, Südpetrol AG für Erdölwirtschaft in Munich and ANIC (subsidiary of ENI ) founded the Ingolstadt AG (ERIAG) oil refinery together with a consortium of Bayerische Hypotheken- und Wechsel-Bank , Bayerische Staatsbank and Deutsche Außenhandelsbank Schacht und Co. to build and operate an oil refinery at the Auwaldsee in Ingolstadt . It went into operation in 1965. At the beginning, Südpetrol held 50%, ANIC 25% and the banking consortium 25% of the shares. From 1979 50% of the shares belonged to the ENI subsidiary Agip Deutschland GmbH and 50% to Deutsche BP AG .

In 1963, Deutsche BP began planning its Bavaria refinery in Vohburg , which went into operation in 1967.

In 1962, Gelsenberg Petrol AG and Mobil Oil Deutschland founded Erdölraffinerie Neustadt GmbH (ERN) in Neustadt an der Donau in order to build an oil refinery on the municipal area of ​​Neustadt and the then still independent walls .

Due to the difficult economic situation, ERIAG and BP Vohburg began to work in 1985 with their two locations under the name Südverbund , for which purpose connecting pipelines were laid. In Ingolstadt mainly petrol was produced, in Vohburg the focus was on diesel and heating oil. This technical network led to the complete merger of the two companies in 1989 with the establishment of the Raffineriegesellschaft Vohburg-Ingolstadt GmbH (RVI) based in Vohburg. Deutsche BP AG held 62.5% of the shares in RVI and Agip Deutschland GmbH 37.5%.

On January 1, 1998, RVI and ERN merged to form Bayernoil Raffineriegesellschaft mbH . The refinery in Neustadt was integrated into the technical network through additional pipelines.

Due to legal requirements for the quality of fuels (lowering the sulfur content, reducing the aromatic content, etc.) far-reaching technical innovations were necessary. In order to be able to meet the increased demand for diesel and aviation fuel, the Vohburg and Neustadt parts of the company were fundamentally renewed during a 5-year planning and construction phase and an investment volume of 600 million euros as part of the “ISAR” project. The far-reaching modernization measures went under the name ISAR (Initiative for Site Protection, Plant Optimization and Profitability Increase) and cost around 600 million euros at an estimated 330 million euros. ISAR started in 2004 and was completed in 2008. In this context, the Ingolstadt refinery was shut down on August 18, 2008, after it became clear that all three locations in Ingolstadt, Vohburg and Neustadt could no longer be maintained in the future. It was subsequently dismantled and the site was given a new use as a sports park and commercial area. The Ingolstadt site was sold for a symbolic euro, and the partial renovation of the contaminated site should be completed in 2020.

Due to the dissolution of Ruhr Oel in 2015, its share was taken over by the Russian Rosneft .

The operating parts at the Vohburg and Neustadt locations - about 13 km spatially apart - act like a single oil refinery , which is made possible by a total of 11 pipelines . They are mainly supplied by the 759 km long "Transalpine Oelleitung (TAL)" , which leads from Trieste via Ingolstadt to Karlsruhe . 724 employees work in the company (as of 2013).

The company processes around 10 million tons of crude oil annually and pays the tax authorities € 2.6 billion in mineral oil tax . It produces the following products for its shareholders: propane , butane , gasoline , kerosene (Jet A1), diesel , heating oils (EL and S), " solid fuel " (a special high-viscosity heavy oil for the Ingolstadt power plant ), bitumen and sulfur . The company covers around two thirds of Bavaria's demand for mineral oil products. The crude oil is delivered exclusively through the Transalpine Oil Pipeline (TAL) from the Trieste oil port.

The remediation of contaminated sites on the Ingolstadt site is one of the largest redevelopment projects in Germany. 600,000 tons of earth have to be cleaned here. In the ground are u. a. 900 tons of heavy oil, 200 tons of light petrol and toxic perfluorinated and polyfluorinated chemicals ( PFC ) from the extinguishing foam of the former company fire brigade.

In the refinery in Vohburg there was an explosion on September 1, 2018 at around 5:05 a.m. and a subsequent large fire. 16 people were injured in the detonation in the production facility and the subsequent fire. There was a disaster alert. The houses of 1,800 residents were evacuated as a precaution, but they were able to return to their apartments in the morning.