The Bengler (also Bengeler or Klüppelgesellschaft) were a noble society of Hessian and Westphalian nobility.

The urchins worked at the end of the 14th century and are named after their social symbol , which represents a urchin (also morning star , or mace). The knights of the Bengler society are said to have worn a gold and the squires a silver mark, probably on a chain in front of their chests, as was customary in other societies (e.g. sickle society, star society and Schleglerbund ).

The union was created by Konrad II. Spiegel zum Desenberg , Friedrich the Elder. Ä. from the old house Padberg , Friedrich III. founded by Hertingshausen and 26 other members on September 29, 1391 after the Falken Society was dissolved. The Bengler family was founded on the initiative of Friedrich von Alten Haus Padberg the Elder. Ä., Who was in feud with the bishopric of Paderborn , and the Mainz bailiff Konrad Spiegel zum Desenberg, who probably wanted to organize support for the dispute between the archbishopric Mainz and the landgraviate of Hesse (under Landgrave Hermann II ). Logically, the Archbishop of Mainz, Konrad II von Weinsberg, took the Benglers under his protection immediately after their foundation and allied with them on November 5th. The federal government was founded for a period of three years.

The Benglers (without Konrad Spiegel zum Desenberg) fought primarily against Bishop Ruprecht von Berg of Paderborn . In 1391 Friedrich von Padberg was captured with 48 men, but released for a ransom. This was followed by an expansion of the feud, in the course of which the area around Padberg was completely devastated by the Paderborn bishop.

The work of the Bengler is to be classified in the larger political context of the time. During his raids through the Paderborn region in 1394, Friedrich von Padberg also found support from Count Dietrich von der Mark.

The rebels were not crushed until 1396 by the Paderborn prince-bishop Johann I von Hoya and his brother Otto IV. , The prince-bishop of Münster. 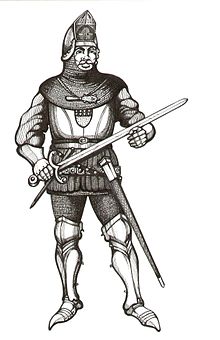 Friedrich III. from the old house of Padberg, one of the leaders of the Benglers (reconstruction 2007)