Coriolanus and Coriolan are redirects to this article. Further meanings are listed under Coriolanus (disambiguation) .

Gaius Marcius Coriolanus (also Gaius Marcius Coriolanus or short Coriolanus ; * before 527 BC in Rome.. † around 488 BC in.. Antium ) was, according to legend, a Roman hero and general, whose pride, ignorance and stubbornness clashes with the plebeians . He was banished from Rome and then waged a war against his own hometown, which he only broke off at the request of his mother.

Shakespeare provided the most famous adaptation of the legend with his tragedy Coriolanus .

The sources of the Coriolanus legend are Titus Livius ' Ab urbe condita (2, 33ff.) And the historical work Romaike Archaiologia (6, 92ff.) By Dionysius of Halicarnassus . However, the main model for the numerous dramas that take up the Coriolan material is the Coriolan biography by Plutarch , who only used the text of Dionysius of Halicarnassus as a source. The popularity of Plutarch's version is explained by Plutarch's express concern to adapt his templates for moral and educational purposes and to prepare them dramatically.

In all three original texts, Coriolanus is in line with people who are historically authenticated today. It was not until the 19th century that the historical existence of Coriolanus began to be questioned. Because of a number of inconsistencies in the legend, current research regards Coriolanus as a fictional character, a falsification of family history.

Plutarch describes Coriolanus as a proud patrician and warrior who fought in his youth not because of the fame but to the joy of his mother Veturia , but who also distinguished himself as an excellent speaker and cleverness. He received his nickname Coriolanus because of his extraordinary bravery in the battle for the Volscian city ​​of Corioli , which led directly to the capture of the city (493 BC).

Already famous and loved by the events around Corioli, Coriolanus stood for election as Roman consul. However, since he made no secret of his pride in his patrician origins and rejected the newly created offices of the plebeians , the people's tribunes , the plebeians did not vote for him and he lost the election.

He then appeared as a staunch opponent of the tribunes and pleaded for their abolition. He was then charged, among other things, with overturning the constitution and inciting the Senate against the plebeians. The tribunes sentenced him to death, but negotiations with the reluctant Senate set his sentence on perpetual eviction from the country (491 BC).

Coriolanus now turned in revenge on his and Rome's worst enemies, the Volscore, and after numerous victories over cities allied with Rome, led them against his hometown (489/488 BC). When the threat to Rome was greatest, the plebeians demanded that Coriolanus' expulsion be lifted. After an initial refusal by the Senate, Rome finally sent embassies to Coriolanus to negotiate the settlement of the war and his return to Rome. After the failure of three embassies, Coriolanus' wife Volumnia and his mother, who had both remained in Rome, along with other women, decided to move to his army camp and ask him to settle the conflict.

Coriolanus could not refuse the request of his mother, who threatened suicide and prostrated herself with his wife and children before him, and withdrew what the Volscians accused him of treason at a popular meeting in Antium and murdered him there.

The figure of Coriolanus and his actions have been interpreted differently over the centuries and depending on the political background. Some saw him as a warning example, others as a role model; He was portrayed as a traitor to the fatherland, an uncontrolled, haughty, cruel warrior, class opponent, outsider, unreasonable as a result of absoluteness, but also as a loyal, selfless son who devoted himself to higher goals and became a victim of political conditions.

Based on a suggestion by Marcus Tullius Cicero , Theodor Mommsen already believed that the Marcier , a plebeian noble family, invented Coriolanus - to glorify their sex, the plebeian nobility and the plebeians as a whole.

It is possible that there is a historical core in the saga. Possibly the Volscians owed several military successes in the early 5th century BC. A commander named Marcius. Later, the Roman side referred to this person as a Roman who had allegedly been banished.

Use of the figure 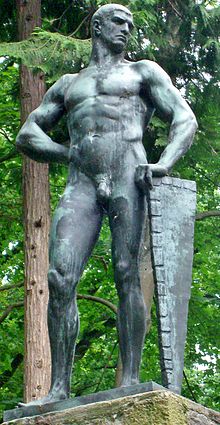 In addition, from the beginning of the 17th century the theme was processed in a large number of now little-known English, French, German, Spanish and Italian dramas, including Italian operas.