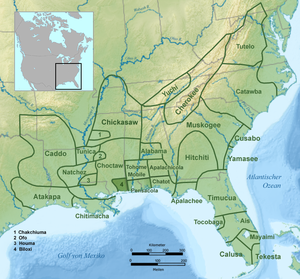 Tribal area of ​​the Biloxi in the 16th century.

The Biloxi (own name Taneks haya : "The first humans") are a tribe of North American indigenous people whose tribal area was in what is now the state of Mississippi in the southeastern United States on the Gulf of Mexico . Their language, Biloxi , which became extinct in modern times, was an indigenous language from the Sioux languages that was closely related to the dialects of the Ofo and Tutelo .

While their number was around 1,000 tribe members in the 17th century, there were only 105 survivors in 1829 and only 6 to 8 survivors in 1908. In 1981 their descendants, together with those of the Tunica, were recognized by the US government as the Tunica-Biloxi Tribe of Louisiana , and in 1985 they again had 105 members. Today the vast majority of the united tribe live on a reservation near Marksville , Louisiana .

The Biloxi are descendants of the Mississippi culture , as evidenced by archaeological sites. They used to speak a Sioux dialect and were thus the southernmost of all Sioux peoples , surrounded by exclusively Muskogee-speaking groups. It is therefore reasonable to assume that they migrated south at an earlier unknown point in time.

The Biloxi were sedentary farmers and hunters. The cultivation of maize, beans, pumpkin and sunflowers was the work of women, while the men hunted bison, deer, wild turkeys and small game with bow and arrow or traps. Catching fish in rivers, inland lakes and on the seashore with spears and nets was also a man's job. They were sedentary and lived in houses with walls made of mud-sealed cane, while the roofs were covered with tree bark.

The clothing of the Biloxi men consisted of a loincloth or leggings , while the women wore a type of wrap skirt . Both pieces of clothing were made of deerskin or vegetable fibers and were held in place by a leather belt. The upper body was covered with a shirt of various lengths made of animal fur, which was made of fur in winter. Men and women wore moccasins on their feet . The making of the clothes was women's work. At festivals, lacrosse games and on the warpath, the men painted their faces and bodies with bright colors. They used dugout canoes for transport on the water .

The first contact with Europeans came in 1699 through the French-Canadian and explorer Pierre Le Moyne d'Iberville , who wanted to establish the French Louisiana colony there. When his flotilla called at a natural harbor east of the Mississippi Delta , he found that this place was already occupied by the Spanish. The Spanish commander refused entry to Mobile Bay , but allowed the French to take in water and wood. D'Iberville dodged 20 miles to the west and established a settlement in Biloxi Bay that bears his name. From here he explored the area and met members of the Biloxi. D'Iberville described an abandoned Biloxi village whose residents had previously died of a smallpox epidemic. In the village he found the remains of huts made of dried mud and roofs made of tree bark. The disease, against which the indigenous people had no defenses, was introduced by Europeans.

The surviving Biloxi gradually moved from Mississippi to Louisiana and Texas . They mingled with members of other tribes such as the Caddo , Choctaw and, most recently, the Tunica . Western migration , shared by numerous other indigenous groups from the Gulf Coast, was caused by growing pressure from European immigrants. In 1828 there were twenty families on the east bank of the Neches River in what is now Angelina County , Texas. In 1836, as allies of the Cherokee, the Biloxi signed the Chief Bowl's Village Treaty . In 1837 a report to the Texas Senate mentioned that the Biloxi and their allies lived in Nacogdoches County and Liberty Counties , Texas and were "150 warriors" strong. When Albert Sidney Johnston and President Mirabeau B. Lamar of Texas declared war on the Cherokee and killed Chief Bowl , that war was unceremoniously extended to other tribes in East Texas . This also affected the Biloxi in Texas, many of whom were expelled to Arkansas in July 1839 . In 1843 the Biloxi signed the Treaty of Bird's Fort on the Trinity River with the Republic of Texas . In 1846 Butler and Lewis found a Biloxi camp on the Little River in Bell County . Other members of the Biloxi moved further west and appeared as allies of the Seminoles in Brackettville, Texas and in Nacimiento, Coahuila , Mexico . Other Biloxi were found among the Choctaw and Creek in Indian Territory in 1886 .

The descendants of the Biloxi combined with the tunica and the remains of the Ofo , Avoyel and Choctaw and were federally recognized in 1981 under the name Tunica-Biloxi Indian Tribe . They share a small reservation in Avoyelles Parish in eastern Louisiana south of the city of Marksville. In the 2010 census, 951 people were counted there, 669 of them with either Biloxi or Tunica affiliation. The two main tribes come from different language families. While the Biloxi spoke a Sioux dialect, the Tunica used an isolated language. Today the tribesmen speak either English or French. The Tunica-Biloxi Indian Tribe operates since 1994 casino Paragon Casino Resort in Marksville.