The Bolongarostraße is the main street of the old town of Frankfurt-Hoechst . Along with Königsteiner Strasse and Hostatostrasse, it is one of the most important shopping streets in the district and connects the districts of Höchst and Nied .

The name of Bolongarostraße is derived from the Bolongaro family of merchants and manufacturers , who have lived in Frankfurt since 1735 and who settled in Höchst in 1771 and had the Bolongaropalast built in Höchst Neustadt between 1772 and 1774 . Until Höchsts was incorporated into Frankfurt in 1928, Bolongarostraße was simply called Hauptstraße , as can also be seen in the Höchst city maps from 1850 and 1898.

Course of the road

Bolongarostraße crosses the Höchst old town between Leverkuser Straße and Königsteiner Straße as a narrow one-way street in the east direction. From there it is continued as a two-lane one-way street through the Höchst Neustadt along the Bolongaropalast to Ludwig-Scriba-Strasse and the suburb of Nied, from Zuckschwerdtstrasse the track of tram line 11 leading into the city runs along the carriageway.

Course of Bolongarostraße in Höchst

Since Bolongarostraße is the main connection between the districts of Höchst and Nied , it is of considerable importance as a connecting road. The volume of vehicles is correspondingly high, regardless of the narrow one-way street in the area between Leverkuser and Königsteiner Straße. All traffic in the direction of Nied flows here. The four-lane section between Mainzer Landstrasse and Ludwig-Scriba-Strasse is very busy, especially during rush hour.

Important public transport lines also run through Bolongarostraße. The traffiQ bus lines 54, 55 and 57 run from Leverkuser Straße in the direction of Nied and Sossenheim . Buses 51, 53, 59 and line 11 of the tram are also available from Bolongaro Palace.

By completed in the fall of 2007 linking the Leuna bridge to the B40a another road link between Höchst and Nied was built on the southern side of the Main that reduce through traffic in peak and to relieve the old town. A traffic census in the summer of 2008 showed, however, that the bypass is rarely accepted, so that Bolongarostraße continues to be exposed to heavy traffic from through traffic.

It is also being considered to extend the tram tracks west to the Höchst city center. 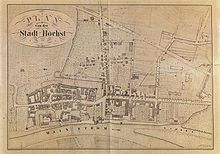 Bolongarostraße is part of an old country road between Frankfurt and Mainz, which can be traced back to Roman times in parts.

At its core, Bolongarostraße was the former main street of the city of Höchst and crossed the city between the two city gates Obertor (“Storch”) in the east and Untertor (“Specht”) in the west. It is certain that the main road already ran around the year 1000 on a route a little north of today's Bolongaro road through the village of Höchst at the time. In terms of the routing and development, initially only little changed due to the urban elevation of 1355. After the city was expanded in the 15th century, the main street in the area between today's Hilligengasse and Storchgasse was widened. The Höchst market square was located here until the 1920s . 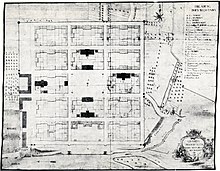 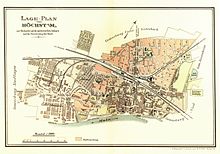 The road to Frankfurt, today's Mainzer Landstrasse, was built according to plans from the first quarter of the 18th century. The route between the Höchst old town and Nied largely corresponds to the former Roman road.

The incumbent Elector and Supreme Lord Emmerich Joseph von Breidbach-Bürresheim planned to promote Höchsts' economic development by founding a new town in the east of the old town on Mainzer Landstrasse to Frankfurt. The Italian Bolongaro family built their baroque palace here between 1772 and 1774. The course of the thoroughfare itself corresponded to the old route, but the new town project was no longer implemented after Emmerich Joseph's death in 1774.

In the 1820s, the current course of Bolongarostraße was determined when, after the construction of Königsteiner Straße between 1814 and 1820, the road layout in Höchst Neustadt was redesigned based on the old plans from the 18th century. The forecourt of the Bolongaropalast, which was removed in 1830, was then on the site of today's Bolongarostraße. In the city map from 1850 this street section was still called Die Neustadt , only in the plan from 1898 this section was also called the main street . When the Mainzer Landstrasse was expanded in 1816, the Obertor and the Untertor in the Höchst old town were demolished together with the gate towers in order to improve the flow of traffic.

The course of the street was fixed with the plans from the 19th century and did not change any more. After the construction of the new Nieder Niddabrücke in 1951, the eastern part of Bolongarostraße between Nidda and Mainzer Landstraße was later closed to through traffic.

The development on Bolongarostraße is uneven. Many older half-timbered buildings in the Gothic style fell victim to the great city fire of December 1586. In the Höchst old town, half-timbered buildings from the Renaissance and Baroque periods dominate the scene. Vacant lots were mostly filled in a contemporary style during the Wilhelminian era , some old houses were rebuilt and plastered or replaced by new buildings according to contemporary tastes.

In the lower part of Bolongarostraße, on the northern side, there are only residential buildings from the Wilhelminian era. On the southern side there are two larger commercial properties in addition to some residential buildings. Between Nidda and Mainzer Landstraße, Bolongarostraße is undeveloped on the southern side of the street, a green area extends here.

Well-known buildings along Bolongarostraße in Höchst are:

View from the Kronberger Haus onto Bolongarostraße

Bolongarostraße is an important location for crafts, small businesses, gastronomy and retail in Höchst. The Höchst Porcelain Manufactory, which had its headquarters in Dalberger Haus for a long time and now maintains a sales point there, and the Lindner Congress Hotel are the best-known businesses on Bolongarostraße. In addition, there are specialty stores in various industries and a large number of restaurants. In the Nieder area of ​​Bolongarostraße there are only a few restaurants in addition to a gas station and a newly opened branch of a discount store in summer 2007 .

In recent years, however, suburbanization and economic decline have forced a number of business owners to give up. Shops and restaurants were empty and some of them were rented by rapidly changing suppliers of cheap goods, telephone shops and fast food outlets. This development is received differently in Höchst. While the local retailers' association IHH finds the settlement of low-cost providers better than vacancies and sees it as an economic strengthening, some retailers and representatives of the citizen's association of Höchst Altstadt perceive this tendency as a decline and trigger for further expulsion of established specialist shops.

According to a report by the Frankfurter Rundschau from November 2006, however, a new structural change is taking place in Höchst, and there are waiting lists of interested parties who want to open qualified specialist shops for both low-cost and vacant business premises.