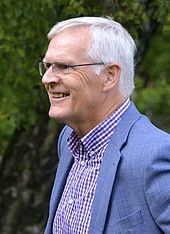 Bosse Ringholm was born in 1942 into a working-class family. He attended high school in Skövde , but did not finish school. Very early on he became involved in the Socialist Youth and was elected chairman in 1967. Other stations in his political career were Provincial Councilor in Stockholm 1983–97, Director General of the Labor Market Administration 1997–1999 and Minister of Finance from 1999 to 2004 in the Persson government . From 2004 until the replacement of the social democratic government by the bourgeois Alliance government on October 6, 2006, Bosse Ringholm was Deputy Prime Minister. After the resignation of Foreign Minister Laila Freivalds as of March 21, 2006, he had temporarily headed the ministry for a few days before Jan Eliasson took over the office.