An envelope (also: envelope or, in Switzerland, envelope , outdated envelope ) is the shipping packaging for a letter . 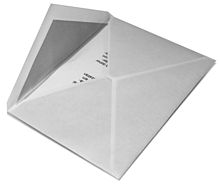 Originally, letters were not packed in separate envelopes, but simply protected from unauthorized access by folding or rolling up and sealing . Often as folded letters , as paper was a valuable raw material. Later, in contrast to ready-made envelopes for inserting and sealing the letter, this became comparatively uneconomical. In today's postal correspondence, envelopes are used almost exclusively to protect the contents, with the exception of direct mail .

Envelopes were first sold in 1820 by the book and stationery retailer SK Brewer in Brighton . He cut the envelopes with the help of tin templates. In response to the rapidly growing demand, Brewer awarded the London company Dobbs & Comp. the order for the production of envelopes as mass-produced articles. The first machine for making envelopes was made by E. Hill and W. De La Rue, London , in 1844.

Envelope paper must be opaque, writable, printable and fold-resistant. It is made wood-free and containing wood, smooth or satined on one side, white and colored. But even recycled paper with the " Blue Angel " is used. Recently, FSC or PEFC papers, whose pulp comes from sustainable forestry, have increasingly been used for envelopes . Some FSC envelopes bear the logo of the WWF panda bear. There are also envelopes made from plastic fibers, from transparent or translucent film and from papyroline , a thread-reinforced material. Almost all the envelopes have a lock on the inside cover of rubber or two adhesive strips. Some envelopes have a window made of glassine or transparent plastic glued into the address area . The margins of the letterhead are also held together with adhesives.

First, starting from the paper roll, the inside and outside pressure of the envelope is applied using the flexographic printing process. Then the envelope silhouette is punched out, then the windowing takes place, and the window film is glued in. Then the side flap and the closure flap rubber coating are applied. After the sealing flap has dried, the envelopes are packed and then the finished boxes are packed on pallets using robots. Modern envelope machines produce up to 1,600 envelopes per minute or almost 100,000 per hour. Such systems cost more than two million euros. The most important manufacturers of the machines are Winkler + Dünnebier in Neuwied and FL Smithe in the United States; both companies belong to the Barry-Wehmiller Companies (USA).

Paper envelopes can be easily recycled. The waste paper used serves as a raw material for new recycled paper. The window foils used are made of glassine or polystyrene . They are separated out when the waste paper is deinking (decolorizing) and then also recycled or incinerated in the power stations of the paper mills. However, it is better to separate the window before disposing of it and dispose of it in the recycling bin, as this is the only way to achieve the desired flow of mono-materials and ensure recycling.

Envelopes are mostly available in standard sizes. They are defined in ISO 269 and DIN 678 largely based on series C from DIN 476-2 or ISO 217 and series B from DIN EN ISO 216 or formerly DIN 476-1. The contents for C envelopes are A formats of the same number and for B envelopes the corresponding C formats, whereby the sheets can be brought to the next smaller format of the same series by folding them several times in the middle of the longer side. Standard envelopes therefore also predominantly have the usual aspect ratio of √2: 1.

In addition, only the format of the largest standard letter envelope, E4, which lies roughly in the middle between B4 and A3, is not included in other DIN or ISO standards.

Envelopes in format C4 are not only produced in landscape format, but also in portrait format and then have a viewing window that fits the address field of unfolded business letters according to DIN 5008 on A4 paper. The formats C0 to C3 and C7 to C10 from DIN 476-2 have not been adopted in DIN 678-1, but occasionally at least envelopes in C3 format are offered.

For business letters on A4 paper format, the envelope formats DIN long (DL) with manual filling, C6 / C5 with machine filling and C4 are the most widespread in Germany. The C6 / C5 format is by far the most frequently used format in Germany and, according to DIN 678-2, is used alongside C4, C5 and C6 as an envelope for automatic enveloping.

Private mail is also often sent in C6 envelopes that can accommodate A6 greeting cards and postcards . Large and heavy goods are often sent in gusseted bags made of Kraft paper with side gussets and a block bottom in formats B5 to E4 ( mailing bags ).

There are non-standard envelopes, for example, for greeting cards , which u. a. can be square.

Only size E4 is therefore outside the limits defined for letter post and must be sent as a parcel or parcel accordingly. The maximum size for large letters and maxi letters corresponds exactly to format B4.

Size and position of the windows

There are several different standards for window envelope dimensions.

DIN 680 results in different distances between the viewing window and the upper edge, depending on the format, so that a letterhead according to DIN 5008 must be folded exactly in order to place the address field in the viewing window:

With C4, shown here rotated, the viewing window is either 27 mm or 45 mm from the upper edge, depending on whether letterhead type A or type B is used. The opening is usually on the bottom or on the right.

In Switzerland there are also Swiss Post requirements for letter design and the placement of the address field.

The British standard BS  4264 defines a 39 mm high and 93 mm wide viewing window for the DL format, which is 53 mm from the upper edge and 20 mm from the left edge.

The German Post expects the marked parallel to the longer side of the viewing window or the envelope, the postage in a 40 mm high and 74 mm wide field at the top right, the address of the sender in the 40 mm high strip to its left and the address of the addressee in the remaining region at least 15 mm from the outer edge. The destination code is printed in the area below the address .

The Austrian Post expects, furthermore, that the area is kept below the 74 mm wide franking and larger sizes, a 74 mm high area at the bottom in the format C5.

Royal Mail expects that two fields will be kept free in a 70 mm high and 140 mm wide area at the bottom right and that the address of the sender will be placed on the rear flap.

The Swiss Post provides a large number of variants.

Envelopes are sealed by gluing the slightly overlapping, folded-over open side (flap for short) to the envelope. Either dry, water-soluble adhesive is used, which is moistened when closing, or they are self-adhesive. The blue glow when a self-adhesive closure is opened is called triboluminescence . In the case of high-quality envelopes, adhesive bonding with cover strips is often used. The latter are mainly used for high quality business mail. The name and address of the addressee are written on the front of the envelope, the information about the sender is usually written on the back or on the top left of the front.

According to the Association of German Envelope Manufacturers (VDBF), around 13 billion envelopes, mailer and gusset bags are currently produced in Germany (as of 2019). Less than 10 billion envelopes are still sold in Germany, and the trend is continuing to decline. The market has fallen sharply in the last 10 years, as electronic media are increasingly replacing envelopes for sending invoices. Sales envelopes have also lost a lot of their importance in recent years. Large-format mailing and folding bags, on the other hand, were more able to benefit from the new Internet medium.

In Europe, around 46 billion envelopes are sold annually (as of 2019), which corresponds to a decrease of almost 60% in 10 years.

In Germany, the two most important manufacturers are the Mayer-Kuvert and Bong group of companies . At the European level there are also Tompla (E), La Couronne (F), GPV (F), Nova Kuverta (SLO), Blasetti (I), ELCO (CH) and Goessler Kuverts (CH), which together have a total market share of represent approximately 90%.

A special form of the envelope is in the internal increasingly used reusable correspondence interoffice mail envelope .

On these envelopes you will usually find a kind of table in which the sender, the date and the recipient are entered.

There are also holes that allow a quick inspection of whether there are documents or the like in the envelope. They are mainly closed with a string closure.

The red pull tab strip in the envelope to open penniless.
The small window on the right envelope shows the print before opening.

Patented envelopes offer a clean opening of the letter without tools . At the edge the envelope is perforated on the "thumb grip area" , by tearing this small piece of paper a "tear-off cord" (" Zipp-o-let " / English pull tab ) is cut out at the edge, which opens the envelope with it. This technique is z. B. has long been common in cigarette packaging with clear film .