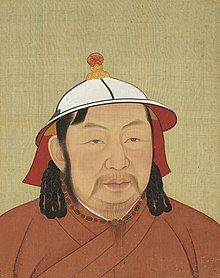 The younger brother of Khaishans ( Külüq Khan , ruled 1307–1311) was seen as a representative of Chinese interests and as gentle, charitable and hardworking. Immediately after taking office, he executed five ministers (his brother's most important people) for alleged corruption.

Buyantu Khan became famous for his attempt to reintroduce the Chinese official examinations in 1315, which should give Confucians greater access to the administration, which is often occupied by non-Chinese. This was considered to be progress, although these civil servant examinations severely disadvantaged the Chinese and were therefore only a parody of the earlier civil servant exams. Buyantu Khan surrounded himself with Chinese scholars such as B. Zhao Mengfu (famous painter) and took care of the administration of justice.

Around the sons of his brother ( Qoshila and Toqa Timur ) a Mongolian opposing party crystallized, but because of the youth of its representatives it had no chance. Qoshila fled to the Chagatai in 1316 . Relations with the Chagatai were strained after minor disputes resulted in a war in 1314, which the Yuan under General Togachi (in conjunction with the Ilkhan Öldscheitü ) won in the following two years, 1315-1316.

In the last months of the emperor's life began by the hated Finance Minister Temüder († 1322) instigated power struggles at the Kaiserfof, which had their background in the difficult financial situation and ended with the murder of Buyantu Khan's son Suddhipala (Against Khan, r. 1320-1323).