Buzzword Bingo , in the later spread also bullshit bingo and group talk Bingo called, is of a humorous variant bingo that -Spiels often meaningless use of many keywords in lectures, presentations or meetings satirizes .

Instead of bingo cards with numbers cards with key words (English. Buzzwords ) used. In contrast to the original bingo, in which the numbers to be deleted are drawn from a lottery drum, words are deleted when they are mentioned. If the row, column or diagonal is completely filled, the player should stand up according to the rules and shout “Bingo” or, to emphasize the empty content of the word phrases, “Bullshit”. With the game and this exclamation, the excessive use of often empty keywords is criticized at the same time. 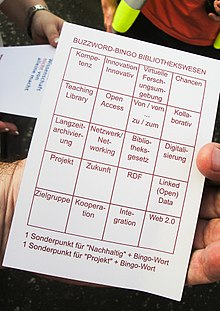 The game was created in 1993 by Silicon Graphics in Mountain View . It was there that the scientist Tom Davis came up with the idea for the game while attending a presentation in which many keywords were used. He wrote a program in the C programming language that generated bingo cards that were filled with the appropriate keywords. He then distributed these to his employees and called his idea Buzzword Bingo . A little later, his colleague Chris Pirazzi developed a web version of the program that was publicly accessible and thus led to the further distribution of the game. When Scott Adams picked up the idea in one of his Dilbert cartoons in 1994 , the game became known to a wider public and quickly became popular.

The game gained further media attention in 1996 when the then US Vice President Al Gore , who was said to have a penchant for buzzwords, gave a speech to a senior year at MIT and the students distributed cards for an Al Gore Buzzword Bingo. In 1998 the game was even featured in a cover story in the Wall Street Journal .

In the period that followed, the game spread under the name Bullshit Bingo on the Internet , especially through websites and chain emails . IBM used Buzzword Bingo in 2007 for a TV advertising campaign.