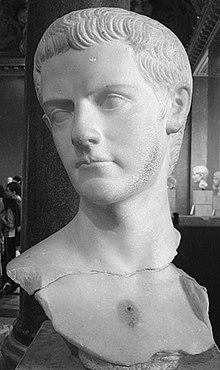 Caesarial madness describes a specific form of hubris , megalomania and paranoia that is said to have occurred in particular among some Roman emperors . The term denotes less a disease in the medical sense than a bundle of characteristics of a monarch unsuitable for rule. In the meantime, the term is generally used for dictators' morbid exaggeration of power .

The term Caesarean madness became a catchphrase by Gustav Freytag , who took up the expression furor principum (German: "princely madness ") used by Tacitus in his novel The Lost Handwriting (1864) . The term gained greater fame in 1875 through a study of medical history, namely Friedrich Wiedemeister's Der Caesar Madness of the Julio-Claudian imperial family . The term was initially only related to the rule of some members of the Julio-Claudian imperial house , later it was generalized with regard to all (Roman) monarchs.

The expression Caesar's madness found further spread through the script Caligula. A study of the Roman madness of Caesars by the later Nobel Peace Prize laureate Ludwig Quidde (1894). Quidde named the essential elements as follows:

Quidde referred his statements explicitly to Emperor Caligula (37–41 AD). He assumed that some rulers, under the "impression of an apparently unlimited power", believed that they were no longer bound by law and law and, influenced by the flattery of those around them and their own propaganda , believed in their own superhumanity or even divinity would have started. Most readers, however, interpreted Quidde's study as a barely concealed criticism of Kaiser Wilhelm II .

After the Caligula , Quidde's career as a historian ended abruptly. Although there was no legal proof of him because of the study itself, in the field he became a persona non grata for many nationalist-minded colleagues . Shortly afterwards he was sentenced to several months' imprisonment for another reason for lese majesty and was then socially ostracized. The Caligula became the best-selling political pamphlet in the German Empire, with 31 editions up to 1926 .

In addition to Caligula, Nero , Commodus and Elagabal are particularly typical cases of Caesarist delusion . Even Domitian and Caracalla are often called in this context. From the perspective of today's ancient historians , this labeling is problematic because it is often to be expected that the picture that ancient tradition paints of these rulers is at least partially deliberately distorted and exaggerated: What appears in the sources as madness is sometimes simple owed to the tyrants topically . Many an emperor who did not want to or could not adhere to the complicated rules of the principate and who therefore aroused their displeasure by neglecting the senators' sensitivities was portrayed as a madman by historians such as Tacitus or Cassius Dio as a punishment (cf. Damnatio memoriae ). Corresponding assessments may also have been made in some cases in order to be able to justify the killing of a ruler as " tyrannicide ".

One of the Roman precautionary measures against the madness of Caesars was the presence of a slave on the carriage of a victorious triumphant who had to remind him of his mortality. He whispered in his ear: Respice post te, hominem te esse memento (roughly: look behind you and remember that you are human).