The Jewish religion did not play an important role in his parents' home . His parents had resigned from the Jewish community, saw themselves as free religious and strove to assimilate into German society. Carl Klieneberger was after a medical school, which he at the universities of Strasbourg , Berlin and Kiel graduated in 1899 and Kiel with the promotion finished, first as assistant physician in the district mental hospital Stephansfeld in Alsace operates. In the years 1900/1901 he served as an army doctor, then he worked as a junior doctor in Elberfeld , Frankfurt am Main and in Konigsberg , where he in 1906 for the subject internal medicine habilitation was.

From 1912 he was associate professor in Königsberg, in the same year he became director of the city hospital in Zittau and chief physician of its internal medicine department. He had to give up this position in 1933 after an anti-Semitic smear campaign. His sister Emmy Klieneberger , who worked as a bacteriologist in Frankfurt am Main, emigrated to London in the same year . Carl Klieneberger was released from his position at the hospital on the basis of the law for the restoration of the civil service and worked in a private practice in the following years, in which he was exposed to further discrimination. When his license to practice medicine was to be revoked on October 1, 1938 , he committed suicide on September 30 of the same year. 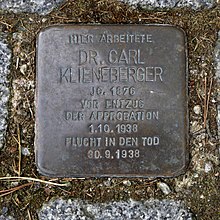 Stumbling block for Carl Klieneberger on the hospital campus