The Congregation of the Cellites of St. Mary belongs to the Catholic communities of religious sisters whose main field of activity is nursing .

The convent in Cologne was founded on November 18, 1316 by a donation from the Kusin couple. The building was a tower; Over time, the adjoining buildings were added through further donations. After they had asked the archbishop's official for his protection, he certified them on October 20, 1383 to be “good Catholics who live in poverty and chastity”. No specific number of members was prescribed for the convention. In 1452 nine Beguines formed the convent; In 1487 there were twelve.

The city commission found "that they were poor and wretched sisters who lived on alms and devoted themselves to the care of the sick". In 1503 they adopted the Rule of St. Augustine and thus became Cellites. On January 21, 1508 the auxiliary bishop Theodoric consecrated her chapel, which was placed under the patronage of St. Augustine and St. Mary Magdalene . In 1521 they sent six sisters to Düren . On April 12, 1629 (at their request) the Vicar General Johannes Gelenius allowed them to put up a bell and use it to invite the faithful to worship. They were also allowed to keep the sick oil .

In the course of the French Revolution there were disputes in the monastery, which can only be understood against the background of general political and ecclesiastical events. In 1798 the sisters, against the objection of the superior, pushed through the division of the monastery property and left the monastery. The superior stayed in the house alone for eleven months, then some sisters returned to the convent.

In 1794 the French era began in the left bank of the Rhine : French troops occupied it.

In 1800 there were nine sisters in the community; after five sisters left, there were four in 1802.

In 1802 there was secularization on the left bank of the Rhine .

In 1802 the "Zederwald" convent was abolished and the sisters were united with the "Zur Cell" convent. Together they now counted six sisters, which was still the case in 1826. In 1827 the "Klein St. Ursula" convent followed the cell convent. As a result of an archbishop's decree, the six sisters relocated to the former Carmelite monastery of St. Maria in Kupfergasse on September 4, 1828 .

They were followed on November 4, 1828 by the six sisters of the "On the Holy Trinity" convent. A day later, the new community elected its first superior, 79-year-old Elisabeth Hansen . In order to provide the newly created community with the necessary material means for daily maintenance, they were assigned two thirds of the property of the former Trinity Monastery and two thirds of the property of the former monastery of Little St. Ursula. On December 1st of the same year (1828) the Archbishop of Cologne Ferdinand August von Spiegel issued new statutes, which were announced to the community on December 10th by the monastery commissioner. In these statutes, the sisters were required to take vows of chastity and obedience for three and five years, respectively.

If there is government approval, the sisters should take the vows of poverty and perpetual vows without hesitation . The new statutes also limited the term of office of the superior (mother) to three years and stipulated a three-month trial period in civilian clothes for future entrants. The first dressing took place on September 23, 1834 , after the aspirant had received six months of training in nursing in the Bürgerhospital. In addition to the dowry of 100 Thalers, she had to pay for the dress of the order as well as the festivities and furnishing of her room out of her own pocket. A visit from December 1844 complained about the condition of the monastery, in which the sisters had close contact with outside families. In addition, there were often "extended celebrations" in the monastery itself, which "[...] sometimes ended with noisy merrymaking, with singing, dancing, jumping and spectacles". One was particularly excited that some sisters had even dressed up for Carnival.

The sisters also prefer to take care of the care in the country, where they earn more and are more independent from the monastery. We don't hear much in the next few years. Only again on October 17, 1842, when the poor administration banned the admission of new female aspirants because, in their opinion, they were not necessary. On February 28, 1844, the Poor Administration issued a decree in which the number of sisters was set at twelve and the income of each of them at 60 thalers. In addition, she stated once again that the monastery properties were part of the property of the poor administration. The sisters, however, sued this decree in several instances until on April 4, 1854 the royal appellate court finally ruled in favor of the sisters.

In 1860 a reform was carried out without any problems and on December 17, 1861, perpetual vows were taken. According to the Archbishop, these should in future be preceded by five-year temporal vows after completing a two-year novitiate. After setting up a ward with twelve beds in their house in the same year, they succeeded in opening their first branch in the following year when they took over a hospital in Krefeld . When the German-Austrian war broke out in 1866, four sisters and some brothers left the Alexian Monastery in Cologne on July 2, 1866 to take care of the injured. However, due to a mix-up, an award intended for her was given to the sisters in the Bürgerhospital, who, however, had not sent anyone to the battlefield. By order of the monastery commissioner, who pointed out that the sisters performed their service for the glory of God and not for the sake of secular honor, an objection to this confusion was omitted.

In the course of the Kulturkampf , the order was forbidden by law on May 31, 1875 to accept new members unless they asked for permission and received it. The transfer remained permitted (as the Superior General asked); however, it had to be notified and subsequently approved. On August 26, 1882, the first attire could be done again after some of the aspirants had waited for up to 7½ years. During the next four years, the superior was given permission to dress every time at her request, and on February 15, 1887, she was informed that she no longer needed to obtain permission. 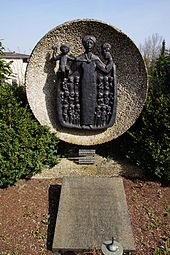 By 1909 the Congregation of Episcopal Law grew to around 270 sisters in 20 branches and in 1933 reached 530 sisters and 49 novices in 47 branches in the dioceses of Cologne , Aachen , Münster , Haarlem and Roermond . Due to the effects of the war, the old parent company could no longer be maintained, so that after the Second World War, in 1959, it was relocated to Graseggerstrasse in Cologne- Weidenpesch (today: Cologne- Longerich / Gartenstadt Nord). But here, too, the shortage of young people forced the community to increasingly close its branches. The community, in which 362 sisters still worked in Germany in 1966, fell below 100 members for the first time in 1998.

At the beginning of 2013, two hospitals run by the Foundation of the Cellites of St. Mary got into the headlines and criticized for rejecting a rape victim and refusing to secure evidence. The cause was an ethical guide published by the foundation, which z. For example, the prescription of the morning-after pill is prohibited under threat of termination without notice , and a campaign organized by anti-abortionists to prevent abortions from being carried out by doctors employed in the carrier's clinics.