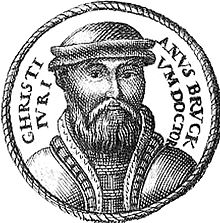 Christian Brück was born the son of Chancellor Gregor Brück around 1516 in Wittenberg . He was accepted into the Wittenberg University in the summer semester of 1532 . He continued his studies with Philipp Melanchthon on the Elbe in Bologna ( Italy ), where he stayed until 1542. Returning to Wittenberg , he obtained his legal doctorate on February 5, 1543 and in the same year married Barbara Cranach, a daughter of the painter Lucas Cranach the Elder. Ä. who received a dowry of 5,000 guilders from her father . In Wittenberg he initially worked as a private scholar and teacher and in 1543 became counselor and servant of Elector Johann Friedrich I (1503–1554).

As a result of the Schmalkaldic War , he fled from Wittenberg with his wife and child to Braunschweig . From Braunschweig he went to Nordhausen in June 1547 , where he had been court counselor from 1550 on the recommendation of his father and was appointed chancellor of Johann Friedrich II the Middle (1529–1595) at his court in Gotha in 1555 .

However, the trust placed in him disappointed Brück; his government aroused offense and hostility everywhere. The involvement in the Handel Knight Wilhelm von Grumbach he had with his execution by quartering on 18 April 1567 Gotha atone. Barbara Cranach survived her husband and was only able to save her marriage property with great difficulty.

Their daughter Barbara, who married Jacob Schröter (1529–1613), Mayor of Weimar , has an ancestral line to Johann Wolfgang von Goethe on his mother's side. The daughter Elisabeth was married to the councilor and cloth maker in Weimar Caspar Koch, whose father had become mayor of Weimar in 1535. The grandfather's first name Christian was continued by Elisabeth's son Christian, who was baptized on July 23, 1596 in Weimar.

The memory of Christian Brück and his involvement in the Grumbachian Handel is still alive in Gotha in the legend The Three Bad Omens . After that, Brück played with a pumpkin during the siege of Gotha in the spring of 1567, threw it up several times and caught it again. In the process, however, the pumpkin broke into four parts in his hands. According to the legend, this was interpreted by intelligent people as a bad omen for Brück's fate, which was fulfilled only a few weeks later when he was quartered (!).