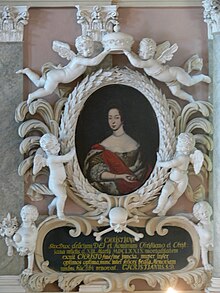 Christiane died early at the age of only 19 - probably of puerperal fever . In her memory, her husband had the castle church of St. Trinity built. Christiane was buried in a pewter coffin in the princely crypt of Merseburg Cathedral .

Her only marriage was on February 13, 1677 in Merseburg with Christian, Duke of Saxe-Eisenberg , the son of Ernst I, Duke of Saxe-Gotha-Altenburg from his marriage to Elisabeth Sophia of Saxe-Altenburg .

She had a daughter with her husband: