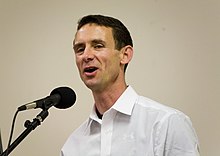 Chuck Palahniuk [ ˈpɔːlənɪk ], real name Charles Michael Palahniuk (born February 21, 1962 in Pasco , Washington ), is an American writer and journalist . He currently lives in Vancouver (Washington) and is best known for his first work Fight Club (1996), which was filmed by David Fincher with Brad Pitt and Edward Norton (see also Fight Club ). His novel Choke (2008) was also made into a film by Clark Gregg with Anjelica Huston and Sam Rockwell .

Prior to his writing career, Palahniuk attended the School of Journalism at the University of Oregon , worked as a freelance journalist and utility vehicle mechanic, and did volunteer work in homeless shelters and youth hostels.

His childhood was marked by violence. His grandfather murdered his grandmother before taking his own life. Palahniuk's father, Fred Palahniuk, was murdered by his partner's former friend.

On its website, Palahniuk offers “premium users”, among other things, writing seminars and answers a large number of reader inquiries personally. His website is considered one of the largest central contact points for a single author.

The film adaptation of his book Fight Club by David Fincher made Palahniuk very pleased that he said "he sees the film as the completion of his novel".

Other authors like Bret Easton Ellis even compare Palahniuk to well-known authors like Don DeLillo and Kurt Vonnegut .

Palahniuk's idea for Fight Club came about when he showed up for work one morning, drawn from a fight and none of his colleagues asked him about it. He wondered if it was possible to lead such a double life without asking awkward questions from society. Although Fight Club is Palahniuk's first release, he has previously written Invisible Monsters and Insomnia: If You Lived Here, You'd Be Home Already . Invisible Monsters initially couldn't find a publisher due to its “disturbing content”, and with Insomnia: If You Lived Here, You'd Be Home Already , Palahniuk was not satisfied enough to have it published; however, it formed the basis for Fight Club .

Die Kolonie is a novel composed of 24 short stories in a framework plot . Guts' short story (German title: incident ) caused a stir at Palahniuk's readings, as a total of 73 people passed out. The story appeared as a special supplement to Time Magazine .

The documentary Postcards from the Future, produced in 2003, deals with Palahniuk and his status as a cult author in the USA .

According to his own statements, Palahniuk was influenced by Ira Levin , Irvine Welsh and William T. Vollmann.

His novel “Snuff” was to be made into a film, but the project was discarded. "Lullaby" was made into a TV series in America and "Flight 2039" is to be made into a series by Jim Uhls, the screenwriter of Fight Club. Rumor has it that another of his works will be filmed by director David Fincher.

In a 2008 interview, Palahniuk came out as homosexual .

As of 2014, all Palahniuk works in Germany (except for the Fight Club 2 comic) were published by Festa Verlag .

In 2018 his most voluminous novel - Adjustment Day - was also published by Festa.