Cornelius de Greiff (born June 8, 1781 , † April 16, 1863 ) was a Krefeld citizen and silk manufacturer who distinguished himself after his death through generous donations and foundations for the common good of the city of Krefeld.

Cornelius de Greiff's grandfather, Johann Philip de Greiff, came to Krefeld from Nieder-Saulheim in the Palatinate around 1730 . He initially worked in the wine trade. His son Isaak de Greiff, Cornelius de Greiff's father, was connected to the Krefeld silk trading family Floh through his marriage to Anna Floh. Isaak de Greiff had been an alderman of the city for seven years after the wars of liberation and the end of the Napoleonic occupation. Isaak de Greiff ran the company Cornelius and Johannes Floh together with his friend and brother-in-law Gottschalk Floh, the son of the company founder, as a publishing company .

The name de Greiff comes from the name "Degreif", which can still be found in the original home of the family. The emphasis here is on the first syllable. Only after moving to Krefeld was there a syllable separation, because in the Lower Rhine the emphasis in “Degreif” is on the second syllable (“Dejreiff”). Cornelius de Greiff took a liking to the connection between his name and the bird of the griffin , that he himself owned one or the other image of a griffin as decoration for his house and also had it as a heraldic animal of his choice. The de Greiff column was once adorned with a crowning griffin on its top.

Cornelius de Greiff grew up in an already very wealthy Mennonite family. In 1800 Cornelius was baptized and also a member of the Mennonite congregation. His father bequeathed his descendants not only the shares in his companies, but also all kinds of real estate in Krefeld, Bockum, Oppum and Linn. He bequeathed to Cornelius de Greiff, among other things, the Linner Mühlenhof and the Hausenhof along with the land and accessories. Between the two estates, Cornelius de Greiff had the garden and hunting lodge Haus Greiffenhorst and Greiffenhorst Park built near Linner Castle in 1838 . Burg Linn, or Greiffenburg as it was known at the time, belonged to his brother Phillip, who also owned all kinds of land in Linn from his father's inheritance and lived with his family in the little hunting lodge in the outer bailey.

Cornelius de Greiff inherited his father Isaak de Greiff as managing director of the company Cornelius and Johannes Floh . Due to various difficulties with his partners, Cornelius de Greiff sought sole ownership of the company, which except for the years 1837, 1847 and 1848 always generated an average profit of 10 percent. His brother Phillip de Greiff was also extremely successful in running a silk trade in Krefeld. Until around 1838 he sold almost all of the shares he had inherited in his father's company to his brother Cornelius. The Cornelius and Johannes Floh company employed around 1,000 to 1,200 workers, the majority of whom were silk weavers .

Throughout his life, Cornelius de Greiff, often referred to as “Knelles” ( Krefeld dialect for “Cornelius”) by the Krefeld citizens, was a tight-fisted, eccentric and lonely man . As a rule, he donated nothing, and if he did, only small amounts. In addition to his work as a silk manufacturer, he was an honorary commercial judge, member of the Chamber of Commerce and councilor in the town of Linn, his adopted home, which at that time did not yet belong to Krefeld. He remained a bachelor and led a withdrawn life, appropriate for his class, but modest.

It wasn't until late in his life, at the age of 76, that Cornelius de Greiff decided to retire. In 1856 he began to liquidate his company. In 1857 he also wrote his will. When there was more to distribute due to the liquidation of the company, he wrote two additions in 1860 and 1862.

On April 16, 1863, Cornelius de Greiff died after a long illness at the age of 81 in his house on Friedrichstrasse in Krefeld. The funeral took place on April 20, 1863 at 4:30 p.m. Cornelius de Greiff was buried in the old Krefeld cemetery, today's city garden. His family owned 30 burial fields here.

The grave is still located today in the old part of the Krefeld main cemetery (field C, no. 65–88) and is preserved by the city of Krefeld as an honorary grave.

Cornelius de Greiff had an absolutely loyal bookkeeper and confidante in Friedrich Heinrich Montandon, whom he employed until his death and beyond, and who also included him in his will.

Montandon knew all private, business and secret accounts and knew very well about the financial situation of Mr. de Greiff. He calculated the cash fortune on the day of his death to be 1,348,937.16 thalers . The Prussian Taler was replaced by the Mark in 1871 . One thaler was worth three marks. Between 1873 and 1899 one gold mark was worth around 17.82 euros . This means that Cornelius de Greiff's cash assets alone would be worth around 72,114,180.57 euros during the lifetime of his universal heiress Marianne Rhodius . Then there were real estate and land. In Linn alone, Cornelius de Greiff owned a total of 429 acres (around 1,095,331 m² ). Not to forget the office of his former company on Königsstraße and his private house on Friedrichstraße.

In his will, Cornelius de Greiff bequeathed an enormous sum of 466,000 thalers to the city . His brother Philipp de Greiff had died only a few years before him and thus Marianne Rhodius entered as the universal heiress appointed by him. The committee, which had to watch over the appropriate use of his foundation, found it very difficult with the implementation, since the will gave Cornelius de Greiff a lot of leeway for interpretation. Often one argued with the city of Krefeld about the meaning and purpose and ultimately about the money and its use. His niece Marianne Rhodius was even asked for help at one point or another. In order to be able to use the money as requested in undiminished amounts, she donated the old factory buildings to her uncle's company on Königsstrasse at the urging of the Krefeld committee. After inexpensive renovations, a retirement home was set up here, which became known as the Corneliusstift .

Many facilities were either implemented very late or even implemented differently. A grain hall was no longer really necessary during Cornelius de Greiff's lifetime. The committee found an elegant way out by investing the money for the grain hall and that for the meat hall, a total of 26,000 talers, in a slaughterhouse. At the end of the day, you didn't need that much money for the slaughterhouse. The enormous sum of the foundation brought in good interest, so it was decided to build a market hall for the same amount again. In order to do half justice to the founder, a fund should ensure that the stand prices would always be a third below the usual stand prices. In the end, the construction of the hall was financed again only from the interest of the foundation and with money, which was again donated by Marianne Rhodius from her own funds. 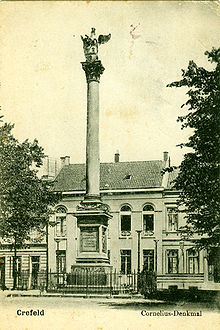 Cornelius monument on the east wall in Krefeld around 1900

Soon after the generous will of Cornelius de Greiff became known, the call for a memorial grew louder and louder. It was to be the first monument that the city of Krefeld would ever erect. After some back and forth regarding the location, the appearance and also the costs, the city erected the de Greiff column in his honor on August 22nd, 1865 on the east wall . The monument consisted of a square granite base with four bronze reliefs with an inscription, the city coat of arms and a dedication. On the base was a slender Corinthian consecration column made of Silesian marble with a crowning griffin made of bronze, de Greiff's heraldic animal chosen by himself. The architect A. Heyden (son of the municipal building officer FW Heyden) designed the monument , the sculptor Julius Moser designed the monument.

In 1943 the monument was largely destroyed in an Allied bombing raid. The column fell and parts of it were broken. The bronze figures had already been melted down for metal extraction. On the 100th anniversary of the death of Cornelius de Greiff, the pillar was to be put up again. But the city of Krefeld made no effort to build an adequate equivalent. Instead, only the remaining parts were used to create a new structure for around 22,000 DM . The new column had no base, the bronze emblems and memorial plaques had already been melted down during the war. The griffin that once crowned the column was also missing. The column itself had been sandblasted to cover up the damage to the once smooth, polished surface caused by the war. So only a small stump remained, which in no way reminded of the proud monument of yore. That they had obviously taken a little too much artistic freedom here, it soon became clear to the city leaders when the new monument only caused scorn and ridicule for the builder. Shortly after its construction, the city administration had the column removed again in a shameful night and fog action. The action could not be kept so completely secret. Shortly after the work began, a few citizens of Krefeld spontaneously organized to commemorate Cornelius de Greiff. A small band played funeral music and, as if to mockery when the construction crew moved away, the street buzzers We drown our grandma's little house .

Since then, the fragments of the pillar have been stored unnoticed and overgrown by hedges in the depot of the municipal civil engineering office and are waiting to be restored. Many Krefeld citizens are demanding that the column be put back in its original place.

On the centenary of the birth of Cornelius de Greiff, the city thanked its benefactor with a big celebration. He was made an honorary citizen of Krefeld posthumously .