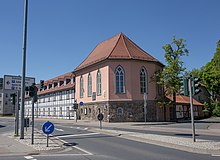 The Cyriaci Chapel is a profaned former hospital chapel in the city of Nordhausen in the Nordhausen district in Thuringia .

Given the frequently occurring in the 13th century in Europe infectious diseases, particularly leprosy , the city Nordhausen built in addition to the existing Hospital St. Georg , a leprosarium . In 1280 Hertwig von Ellrich donated the hospital, which was built around 300 m outside the city wall on the other bank of the Zorge and was called Siechhof , also known as Siechenhof . The associated chapel was built from 1281 to 1284 after Archbishop Werner von Mainz had approved the construction on January 23, 1281, and was consecrated to St. Cyriacus and John the Baptist on November 20, 1284 . In some documents St. George is mentioned as patron. On March 7, 1287 and again in 1289, the community was granted indulgence. On November 18, 1289, Archbishop Gerhard von Mainz gave Hertwig von Ellrich hereditary patronage over the chapel. The Siechhof was probably also used during the plague epidemics of the 14th and 15th centuries.

In the late Middle Ages, the St. Martini and St. Elisabeth hospitals were built so that the Siechhof was no longer necessary as a hospital, but could be used as a retirement home from 1788 after the renovation of the north wing .

During the Napoleonic Wars , the Siechhof served as a hospital from 1806 to 1815 and its cemetery as a first aid station . Hospital operations were not resumed until 1820.

The south wing was rebuilt in 1822-1824 and inaugurated on August 3, 1825 as the city hospital. In 1823 the chapel was demolished because it was dilapidated, but was rebuilt as a neo-Gothic hall building with a half-octagon as early as 1845–1846 and consecrated on September 20, 1846. For this purpose, pieces of equipment and building materials from the St. Martini Church, which was demolished in 1833, were used. In 1867 the chapel was temporarily used as a hospital ward. The small parish of St. Cyriaci was abolished in 1912.

During the National Socialist era , the SA and the police used the Siechhof to arrest Jews from Nordhausen and the surrounding villages before they were transported to Poland or the Buchenwald concentration camp .

After the Siechhof was used as an old people's home until 1991, the south and west wings were extensively renovated with the aim of making the premises of the music school of the Nordhausen district available. This moved into its new domicile in 1995.

In 1997 the Cyriaci Chapel was completely renovated as a concert hall and opened on September 5, 1997. Because of its good acoustics, numerous concerts - mainly chamber music and jazz - take place in the chapel room.

The facility is centered around an inner courtyard (a so-called four - sided courtyard ). The west wing served as an administration building and was built around 1735. The north wing served as the rectory, which, according to an inscription, was completed on November 14, 1788. From 1825 it was also used as a workhouse. The hospital was located in the south wing, built between 1822 and 1825, which merges into the chapel in the east. The east wing, which was used for commercial purposes, also borders the chapel. In 1887 two bells were kept in it, which may have been in the roof turret of the chapel, which was demolished in 1823.

During the construction of the chapel, stone crosses were built into the outer walls. Their exact number is not known, city chronicler Bohne wrote in 1701 of eight crosses made of "red sandy stones", Friedrich Christian Lesser reported in 1740 of seven crosses. One of these crosses once showed the relief of a priest in a chasuble with a chalice in his right hand. According to legend, the crosses represent eight people who drowned in the floods of Zorge during an outdoor mass.

A single manual mechanical knob - organ , which is estimated to be built in 1870, was dismantled after the fall and stored. She had the following disposition:

The music school that uses the band currently has a single-manual organ with a pedal.