Course of the dat-das-line within the German-speaking area 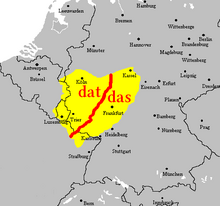 The dat-das-Linie (also: wat-was-Linie , Sankt Goarer Linie and Hunsrück-Schranke ) is an isogloss between German dialects that runs across the entire German-speaking area. To the north of the line, dat applies , to the south of the line, that applies . Within the West Central German language area, it forms one of several distinguishing features in the Rhenish fan between the two dialects Mosel-Franconian ( dat ) and Rhine-Franconian ( das ).

The dat-das-line first crosses the Saarland from the Franco-German language border from France ( Lorraine ) . Within the Saarland, it runs north of Saarbrücken ( Völklingen ) from southwest to northeast to the middle Nahe in Rhineland-Palatinate , from there across the Hunsrück (therefore also Hunsrück barrier ) and reaches the Rhine at Sankt Goar (therefore also Sankt Goarer line ) . On the right bank of the Rhine, it continues northeast along the Rhineland-Palatinate- Hesse border via Limburg an der Lahn and Dillenburg until it joins the Benrath line and the Eifel barrier in North Rhine-Westphalia . From there, the line continues in a north-easterly direction and reaches the Oder and the German-Polish language border near Frankfurt (Oder) .

In southwest Germany, the dat-das-line can usually be determined exactly village by village. The language boundary is blurring with the increasing mobility of the population.