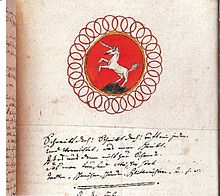 Page from the Debler Chronicle with the Gmünder coat of arms

Born as the son of the merchant Franz Melchior Debler and the patrician daughter Maria Theresia von Stahl, Debler grew up in the previous building of today's town hall of Schwäbisch Gmünd and attended the Franciscan high school in the Schmalzgrube . Probably from 1773 to 1775 he studied at the University of Dillingen .

On May 24, 1784 Debler married Anna Maria Baumhauerin and moved into her house on Gmünder Marktplatz (later Buhl House, Marktplatz 9), where he began to write his Gmünder Chronik and to record the Gmünder city events. He lived here until he had to sell the house in 1815. After the death of his first wife in 1788, he married the landlord's daughter Maria Franziska Köhlerin that same year, who brought a considerable dowry into the marriage. He had seven children with her, five of whom died early. In 1799 Debler was elected as a delegate for the municipal poor institution . After his second wife died in 1811, he married for the last time in 1820. He had five children with the sacristan's daughter Maria Anna Müllerin von Rechberg , only one of whom survived: Paul, who emigrated to the USA in 1850.

In spite of the rich ancestry and the considerable dowries, Debler became impoverished from around 1810, as he was obviously not very happy as a merchant. He had to give up his real estate and last (from 1824) he had to live on the poor relief of the Gmünder hospital . In 1819 he applied in vain for the sacristan's position on St. Salvator .

A “leathery, hard-working collector of all Gamundiana that can only be reached anywhere,” is how Peter Spranger characterized the chronicler. Presumably the experience of loss around 1800 and even more so after 1802, when the imperial city of Schwäbisch Gmünd fell to Württemberg, motivated Debler to compile his chronicle, which, with 18 volumes and over 17,500 large-format pages, is one of the most extensive handwritten city chronicles of all. Chronica. Description of salvation Rome. very old Catholic Kaiserl. Royal Freyen Reich's city of Schwab. Gemünde is the title in volume 1, page 19. The chronicle is important both as the transmission of sources that have not been preserved elsewhere (archives and chronicles), as well as as contemporary historical reporting, especially for the period from 1780 to 1830. It can be used as a testimony to the reading taste of a Bürger around 1800, Volume 15 contains nothing of local history, but a cookbook and an arithmetic book. It represents an important visual documentation, as Debler decorated the volumes with his own, but mostly rather clumsy drawings - among other things, the appearance of the old town hall of Schwäbisch Gmünd is recorded. The chronicle is also important as a source of remembrance culture and the lively narration of its time.

In 1857 the Debler Chronicle was acquired by the city for 75 guilders. It was an important source for Michael Grimm's city ​​history . In 1880, the archivist Paul Friedrich von Stälin tried in vain for the Württemberg State Archives to obtain the work. In the following years it was used by Rudolf Weser , but it was largely forgotten. In 1928 the future city archivist Albert Deibele rediscovered Debler's chronicle. The chronicle was restored in 1937 and 1993.

Debler as a picture reporter