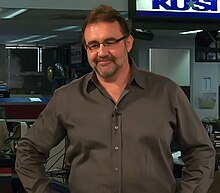 Hahn was born in Chicago as the eldest of three children to an evangelical minister. His parents were emigrants from Germany. The father came to the USA in 1923 via Ellis Island . The family moved to Bellflower, not far from Los Angeles , when Hahn was three years old because his father was appointed pastor of a church in the San Gabriel Valley . In his childhood Hahn was an avid musician, attended a music school and played percussion, drums, cello and bass. At the age of 15 Hahn and his family moved to Burbank and became a percussionist with the Los Angeles Junior Philharmonic Orchestra.

He studied music and art at California State University Northridge , but finished his studies without a degree due to his work at Disney: he had already completed an internship at Walt Disney Studios at the age of 20 , where he worked as a set runner and briefly then assistant to Don Bluth while working on the film Elliot, das Schmunzelmonster (1977) became. He later successfully applied to Disney as an assistant director. He initially worked as assistant director to Wolfgang Reitherman on the 1981 film Cap und Capper . This was followed by duties as production manager for the films Taran and the Magic Cauldron (1985) and Basil, the great mouse detective (1986). Due to his work with Don Bluth, Hahn was hired as a co-producer of the film Wrong Game with Roger Rabbit , which, like Elliot, the smiley monster, was also to be created as a mix of real and animation scenes. Hahn now devoted himself primarily to film production at Disney and from 1988 was a producer of the animated film Beauty and the Beast (1991), for which he was nominated in 1993 for an Oscar in the category of best film . Other Disney blockbusters such as The Lion King (1994) and The Hunchback of Notre Dame (1996) followed. His success brought Hahn the nickname "billion dollar animation producer". Hahn received his second Oscar nomination in 2007 for the Disney short film Lorenzo , this time in the category of Best Animated Short Film .

In 2006 Hahn was interim manager of Walt Disney Animation Studios during the merger with Pixar . Hahn was the executive producer of various documentaries for Disneynature , including Our Earth - The Film , Our Oceans and In the Realm of the Big Cats . Hahn made documentaries such as Waking Sleeping Beauty , Hand Held , High Ground and Tyrus with his own production company Stone Circle Pictures . Hahn is also the author of various non-fiction books on animation.

Hahn has been married to Disney animator Denise Meara-Hahn since 1987; the marriage has a daughter.