Dorothea Arnd al Raschid was the daughter of the publicist Friedrich Arnd and his wife Therese.

From Freiburg , where she had lived since the early 1890s, she participated in the International Art Exhibition of the Association of Berlin Artists in 1891 and in the Great Berlin Art Exhibitions in 1893 and 1894 . From the mid-1890s to 1913 she lived in Kiel and from 1897 to 1913 participated in every exhibition of the Schleswig-Holstein Art Association ; According to her own statements, she also ran a school studio in Kiel. 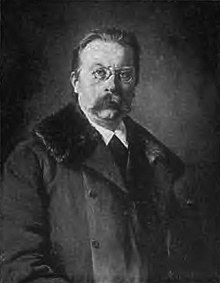 Ernst von Wildenbruch; exhibited at the International Art Exhibition in Berlin in 1891

In 1899 and 1900 she was represented at the Munich Glass Palace Exhibitions, and in 1898 and 1899 at the Great Berlin Art Exhibitions. The portrait of the poet Stine Andresen , today owned by the Kiel Kunsthalle, was also shown in 1904 at the Szczecin art exhibition of the Art Association for Pomerania .

She later moved to Meiningen and was traceable there until 1938.

Numerous personalities have been portrayed by her during this time, including Ernst von Wildenbruch , court manager Alois Prasch , the writer Hans von Wolzüge and Lord Mayor Dr. Rudolf Hammer .